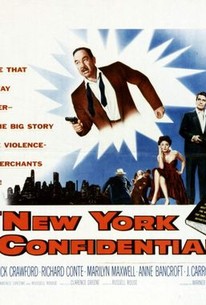 New York Confidential is based on the Jack Lait-Lee Mortimer bestseller of the same name. Richard Conte plays Nick Magellan, a "torpedo" for Manhattan crime boss Charlie Lupo (Broderick Crawford). Pleased with Magellan's work, Charlie promotes him to the topmost rungs of the Syndicate. He regrets this act of largesse when the powers-that-be demand that Lupo be rubbed out. . .by good old Magellan. The most fascinating aspect of New York Confidential is that there isn't a sympathetic character in the bunch; even Anne Bancroft as Lupo's maladjusted daughter is a bit on the obnoxious side. The original Lait-Mortimer book was later adapted into a 1958 TV series, starring Lee Tracy.

Fortunio Bonanova
as Senor
View All

Even though it is not a great movie in and of itself, it had a clear influence on later films and television shows.

It's a richly layered and dense, yet compact movie that sadly loses a bit of its force in the final stretch.

... a classic mix of Hollywood docudrama and tabloid exploitation.

Solid crime drama with an excellent cast including a very young and lovely Anne Bancroft.