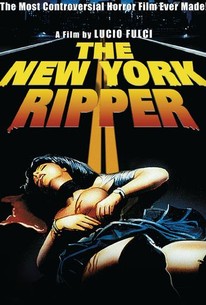 Jack Hedley of The Anniversary stars as a hardbitten police lieutenant tracking a sadistic sex-killer in this gruesome thriller from splatter-maven Lucio Fulci. The misogynistic script (by Fulci and prolific collaborators Gianfranco Clerici and Vincenzo Mannino) posits a femme-hating psycho (who talks like Donald Duck) slashing beautiful women with a switchblade and a straight-razor because his daughter is in the hospital and will never grow up to be beautiful. Fulci was apparently trying to work in a statement about American competitiveness by making his heroine (Antonella Interlenghi) an aspiring Olympic athlete, and having a killer who is concerned that his daughter will never be "the best," but the point gets lost amidst the buckets of blood and gratuitously kinky sex scenes. Pandering to the lowest common denominator as never before in his career, Fulci showed with this blatant play for the sicko slasher crowd that the days of well-plotted, stylish Italian horror were gone, replaced with the most vicious sort of sexual violence and perversion. Despite all of that, there is one fairly masterful sequence in which the suspect's S&M sex partner learns his identity from a radio broadcast and must untie herself and escape while he sleeps. This scene is tense and nerve-wracking, a high-point of genuine fear amidst a nauseating collage of metal blades slicing female flesh. A shameful piece of work that makes Mario Landi's Giallo a Venezia look positively liberated, it co-stars Renato Rossini, Andrea Occhipinti, and Paolo Malco, with cult figures Alessandra Delli Colli, Daniela Doria, and Barbara Cupisti on the chopping block. Cinematographer Luigi Kuveiller, editor Vincenzo Tomassi, and composer Francesco De Masi have all done better work.

It leaves you with a sour taste, especially since Fulci and his screenwriters fail to provide us with any redeeming or even mildly interesting characters.

The acting is bad, the dubbing atrocious, and the dialogue is even worse.

Directed by Lucio Fulci and staring Jack Hedley and Giordano Falzoni OMG this movie is so stupid I just can't take it seriously. Two reasons why I know about this movie is because it is an Italian Giallo film and the book are quite good if you find the right one and the second reason is that. This movie was a torrent that kids were searing about my school and then they started talking about some scene with a girl named kitty getting cut up with a razor while she was tied to her bed so I passed on the movie. But so like Meany things later on I guess I just had to watch it and the reason it is so stupid is because. *Our killer in this quacks like duck *So lady is getting her fix on by watching a guy and girl have sex *Her husbent is pulling himself over the recordings she made *Some girl gets brutally stab in the stomach while our killer is quacking like a duck *another girl is getting a foot up her privates. *Some girl is getting raped by some guy with only 4 figures on his hand. *Our killer inflicts pain on kitty with a razor to her face *Some girl has a nightmare about a guy gutting her in a movie theater. Its just so stupid for a title like the New York ripper it should be called fucked up killer in new York. A lot of things I just had to fast forward I just couldn't watch like when some Mexican guy sticks his foot up the girl nearly made me turn off the movie. 0% for story it's just so boring and lame and stupid 20% for acting the American actors seemed to be doing alright until the duck came along. 65% for special effects the only good killing scene was the end because the movie was over. 5% for characters there sex crazed and most are getting murdered for no reason. 2% for everything else the music was truly the only good part about the movie. But still its no worth watching so just skip it if I were you. Keiko's score 5%

The New York Ripper is one of Lucio Fulci's last great films. What I love about this film is that it's a drastic departure from Fulci's previous Gates Of Hell Trilogy which started with The Beyond followed by The House By The Cemetery and concluded with City Of The Living Dead. The New York Ripper is a mix between detective fiction and slasher film. Lucio Fulci's The New York Ripper is an underrated film from the godfather of gore. But it's understandable as to why it is viewed as garbage. The film is not for the faint of heart, as it's sexually violent, obscene in some parts. But there are a few well constructed scenes of tension and horror. Though Fulci's glory days were behind him at this point of his career. He managed to direct an intense slasher film that makes Friday The 13th look like a Disney film. Fulci's use of gore is relentless and he delivers it in spades. The film was marketed with the tagline: "The most controversial movie ever made". Well, it's definitely one of the most disturbing of the slasher films out there. Fulci fans will love it, common viewers will despise it, and dismiss it. The New York Ripper is an intense slasher film that is in the same category as William Lustig's Maniac! If you love slasher films of the 1980's, and don't mind hardcore violence or mind it, but want to see a terrific slasher film thats been long forgotten, then The New York Ripper is one film that takes no prisoners. One of the most violent films of Lucio Fulci's career, and if you're familiar with Fulci, then that says something about this film.

It's a Fulci film, and as such defies nominal reviewing. Either you're interested in this or not. This one dialed back the gore some but replaced it with sleaze.

A complete suprise to me - having seen Zombie and other Fulci films, with his stereotypical gore and inventive killings (usually at the hands of zombies of some type), Fulci moves completely away from any supernatural tone, to a downtrodden New York in modern-day America. A killer is on the loose, viciously murdering attractive young women. The difference that struck me with this particular film was immediate - the deaths are so much more realistic and cruel. The camera lingering over every explicit detail. Fulci seems to have set out to combine horror with thriller in this flick, and has done so on almost every level - the horror, however, mostly comes from the extremely realistic feel that this movie has and the downbeaten locations where everything occurs. The vicious murders seem all the more believable as a result. I'd read many reviews for this film before finally watching it (in the UK, this film has an almost legendary cult-status; the BBFC actually had the film reels police-escorted out of the country when it was originally sent to them for certification in 1982), but don't necessarily agree with the way everyone mocks the killer's duck-like voice when talking to the police; if anything, it comes across as macabre and there is a reason for it, from a psychological perspective, revealed at the end. Oh yes - the final killing of the cop's girlfriend/prostitute - is every bit as nasty and prolonged as you've heard; the razor being dragged across her open eye and through her nipple, being slashed continually and slowly to ribbons, is just plain mean! For me this is by far Fulci's cruelest, most intense piece; Recommended only for Fulci fans and those who want something much more disturbing than any mainstream slasher pic - all others stay away; otherwise this one will leave you feeling depressed for hours afterwards