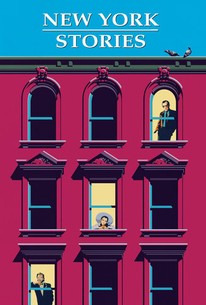 The omnibus film New York Stories is the product of three powerhouse filmmakers. The film is divided into three stories, each exploring a different aspect of life in the Big Apple. Life Lessons, directed by Martin Scorcese, is a Dostoevsky-like tale of the rarefied Art World, with Nick Nolte as a self-indulgent abstractionist who loves Rosanna Arquette, but can't bring himself to lie to her about her negligible artistic talents. Life Without Zoe, directed by Francis Ford Coppola, is more than a little reminiscent of Kay Thompson's Eloise stories, with 12-year-old Zoe (Heather McComb) running amok at the Sherry-Netherland hotel while her parents are embarked upon a world-girdling vacation. The last and is Woody Allen's Oedipus Wrecks, wherein a schnooky lawyer (guess who?) inadvertently "creates" the Jewish Mother From Hell: thanks to a misguided magic trick, Allen's mama (the incomparable Mae Questel) becomes a huge spectral vision on the New York skyline, telling everyone within earshot about her son's inadequacies. The cinematographer lineup on New York Stories includes Nestor Almendros, Vittorio Storaro and Sven Nykvist. ~ Hal Erickson, Rovi

Peter Gabriel
as Himself

Paul Herman
as Clifford, the Doorman

George Schindler
as Shandu, The Magician

Richard Price
as Artist at Opening
View All

Whether it happened by chance or design, the sketches have more than just New York in common: all three have something to do with middle age, as well as with romantic relationships.

Only Woody Allen seems to have understood what is possible in a featurette.

It's still too early to tell whether the cheering New York Stories will be a box-office hit, but one can hope.

New York Stories consists of three films, one good, one bad, one disappointing.

Allen's contribution is the only one that can be counted as a genuine success.

Oedipus Wrecks...is a real gift to people who want to see a quintessential Woody Allen movie but only have 40 minutes to spare.

Each film in New York Stories is a worthy addition to the impressive range of work created by three great directors.

All three films are in different ways concerned with how love affects their central characters, and all three are predictably stylish.

Each film is distinct from the other in its tone, which in some ways is good, but it also hinders any rhythm from emerging other than the fact that this club loves a certain city.

As Meatloaf once said, two out of three ain't bad

Worth it for the Allen episode.

New York Stories have two good tales: Life Lessons by Scorsese and Oedipus Wrecks by Allen. But Coppola's Life Without Zoe, it's terrible, boring and totally disappointing. The worse thing in the movie is Coppola being with others great directors. The 70's was a terrific time to Francis Ford and his classic pictures that gonna be unforgettable in cinema history, but all change in 80's and this status of master stay really weak. One of this disasters is the short film Life Without Zoe in New York Stories, and what make the movie be not very good. Scorsese and Allen save the picture... but not enough.

None of these stories are really BAD per se; just really badly filmed and very nineties lighting. Woody Allen's segment was okay funny, Scorsese's thing was confusing but watchable, Coppola's...I don't even want to talk about it. I'll pretend it didn't happen. There is seriously something wrong with the technique with which these shorts were made. Did they hire worse people to do the camerawork because they weren't given enough money?

One again everything Sofia Coppola touches turns to shit. Tucked in between Scorsese's comment on art and Allen's delightful matriphobia comedy is Coppola's big floating turd of a short.

Scorcese's is priceless. I didn't even watch the other two.