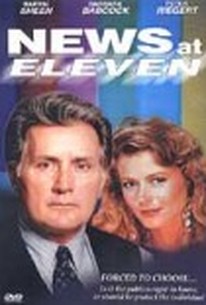 News at Eleven is a stacked-card study of journalistic ethics -- or rather, the lack of same. Martin Sheen stars as the well-respected senior anchorperson at a fictional San Diego TV station. Honcho news-director Peter Riegert insists that the news is becoming a tune-out, and demands more sensationalism in the coverage. When a junior high school teacher is accused of statutory rape, Riegert orders Sheen to exploit the story to the hilt. This results in a near-tragedy involving the high school girl who's accused the teacher. The conscience-stricken Sheen exacts a clever "hoist on his own petard" revenge for the unrepentant Riegert. Made for television, News at Eleven was actually telecast at 9 PM (EST) on April 2, 1986.

Critic Reviews for News at Eleven

There are no critic reviews yet for News at Eleven. Keep checking Rotten Tomatoes for updates!

There are no featured reviews for News at Eleven at this time.