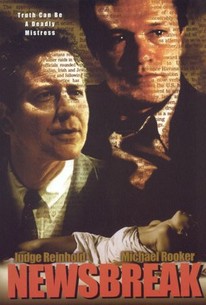 In this thriller, John McNamara (Michael Rooker) is an investigative reporter whose desire to root out a juicy story has not endeared him to many of the people he's written about, and he's lost a few jobs in the process. John wants to hold on to his latest job, but when he's assigned to write about a nuclear power plant that has recently opened, he discovers the plant's manager, Jake McCallum (Judge Reinhold), is the center of a web of corruption that has ensnarled the city's government -- including John's father (Robert Culp). Now John is determined to bring the story to the people, but McCallum's forces are just as determined to stop him. Newsbreak also stars Kelly Miller, Kim Darby, Greg Mullavey, and David Proval.

There are no critic reviews yet for Newsbreak. Keep checking Rotten Tomatoes for updates!

There are no featured audience reviews yet. Click the link below to see what others say about Newsbreak!