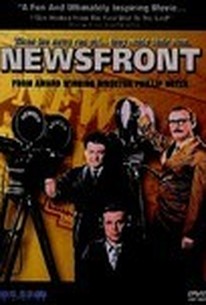 Set between the years 1949 and 1956, Newsfront tracks the destinies of two brothers, their adventures and misadventures placed in the context of sweeping social and political changes in their native Australia. Both of the protagonists are newsreel photographers. Frank (Gerard Maguire) is constitutionally resistant to change, while Len (Bill Kennedy) welcomes any alterations in his own life and in the world around him. The film fluctuates between black and white and color, between actual news footage and reconstructed events. Newsfront is what The Way We Were might have looked like on a tiny budget with a cast of unknowns. The film represented a laudable feature-film directorial debut for one-time documentary filmmaker Philip Noyce. ~ Hal Erickson, Rovi

Bryan Brown
as Geoff the Editor

John Dease
as Ken the Narrator

Bill Lyle
as Macka the Projectionist

It is fascinating material, reasonably exotic.

Newsfront is, in any case, a pleasant and nostalgic movie, told in a key a little too low to constantly involve us.

The way the newsreels are woven into the fictionalized story is seamless.

There are no featured audience reviews yet. Click the link below to see what others say about Newsfront!