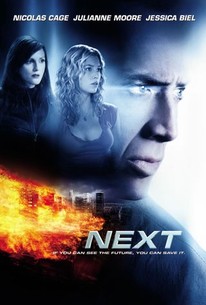 Critics Consensus: Numerous plot holes and poorly motivated characters prevent Next from being the thought-provoking sci-fi flick it could've been.

Critics Consensus: Numerous plot holes and poorly motivated characters prevent Next from being the thought-provoking sci-fi flick it could've been.

Critic Consensus: Numerous plot holes and poorly motivated characters prevent Next from being the thought-provoking sci-fi flick it could've been.

A man with the ability to see the future and change the outcome of events before they occur is forced to choose between saving himself and saving the world in this supernatural thriller starring Nicolas Cage and directed by Lee Tamahori (Die Another Day, The Edge). Cris Johnson (Cage) is a Las Vegas magician who possesses the unique ability to witness the events of the immediate future moments before they happen. As a child Cris was subjected to a series of cruel experiments by government scientists and doctors, but a change of name and a new identity allowed the tortured psychic to elude detection and start a new life away from the prying eyes of his former captors. Though his clairvoyant vision only extends a few minutes into the future, it has still allowed Cris to eke out a living as a low-rent Las Vegas magician while earning a little extra cash at the blackjack tables. Up to this point in his life Cris has never used his power for anything substantial, but when he experiences a vision of Los Angeles being incinerated in a nuclear holocaust, the small-time magician realizes that he could hold the key to saving millions of lives. But as low as he has tried to lie in recent years, Cris has never completely escaped detection by the government. Now, as terrorists prepare to unleash the ultimate horror on an unsuspecting city, FBI counter terror agent Callie Ferris (Julianne Moore) sets out to capture Cris and convince him to use his exceptional gift to prevent the nuclear nightmare from becoming a terrifying reality. Jessica Biel, Peter Falk, and Thomas Kretschmann co-star in the film, which is based on a short story by acclaimed sci-fi author Philip K. Dick. ~ Jason Buchanan, Rovi

Jeff Michael
as Himself

Lisa Joyner
as Herself

News & Interviews for Next

View All Next News

Critic Reviews for Next

This busy sci-fi thriller often seems like a page full of equations rendered meaningless by an early misplaced decimal point.

It's debatable whether Cage's supernatural ability is any more interesting than his strange coiffure.

Another failed attempt to bring Dick's deliriously paranoid mind-set to the screen.

It's all complete nonsense, of course, hampered by a clunky script and Tamahori's uneven direction (which elicits unintentional laughter throughout and, unforgivably, a dull performance from Nic Cage).

More effort has gone into the effects, yet the action amounts to little more than dodging projectiles. I'm very concerned about director Tamahori, who used to make interesting movies about masculinity but doesn't seem to have a grip on the helm here.

It missteps from time to time with its narrative and tone, while also stumbling badly at the conclusion.

The concept behind it is fine, but the execution is terrible.

Tamahori and the phalanx of writers implode Dick's intriguing premise into a pedantic thriller.

Nobody said this had to be great art, but why couldn't it be a satisfying thrill machine?

Someone that can change the future like Cage does here is a bit like Superman, but without any Kryptonite . . .

Audience Reviews for Next

Nick Cage helms this thriller with a supernatural twist in that he plays a dude (Californian accent and all) able to see into the future for 2, count 'em, 2 minutes. Everything happens at once: some international bad guys get a atomic bomb into the U.S., the FBI decide this dude can help 'em find it, just as he runs into "the girl of his dreams". Cue the car chase, the helicopter chase, the explosions, random numbers of people dying in shootouts, etc., etc., etc., = typical Hollywood thriller. It doesn't make sense cause it doesn't have to. Who are you to question, lowly ticket holder?! Eat your popcorn and behold Nicky's black dyed Californian surfer locks! Peter Falk wanders through the middle of the film simply happy to be on the set. Kind of a guilty pleasure. Julianne Moore has a coupla scenes running ... worth the price of admission alone.

Chris Johnson was born with the ability to see two minutes into his own future but chose to hide it in an attempt to lead a "normal" life, until FBI agent Julianne Moore decides that he is her best chance of foiling a terrorist plot to detonate a nuclear weapon in California. Next is a fairly generic sci-fi actioner based on an interesting premise taken from yet another Philip K. Dick story, but the upshot is that it's 24 with Hiro from Heroes standing in for Jack Bauer. There are a couple of flaws in the logic of the plot; the reason why Jessica Biel's pretty and pretty irrelevant character alters his ability and who the terrorists are and what it was they hoped to achieve are both completely ignored. What is left though is an entertaining action flick that ticks all the no-brainer boxes. Essentially it's just a superhero film without the tights but thanks to some well executed set pieces and direction with a modicum of flair it's a fun way to spend an hour and a half if you're not in the mood for anything too taxing.