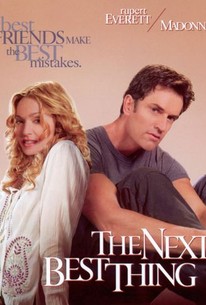 The Next Best Thing Videos

The Next Best Thing Photos

Madonna and Rupert Everett star in this comic drama about a mismatched couple whose unconventional choices lead to an unusual dilemma. Abbie (Madonna) and Robert (Rupert Everett) are best friends, but since Robert is gay, their friendship never progresses into a romance. However, both Abbie and Robert desperately want to be parents, and they agree to have a child that they will raise together. This raises a few eyebrows, especially from Robert's mother (Lynn Redgrave) and Vera (Illeana Douglas), a close friend of Robert's who is secretly in love with him and wants the sort of relationship with him that he has with Abbie. Robert and Abbie go through with their plan, but when Robert meets and falls in love with another man, he decides he wants custody of the child, setting in motion a bitter dispute. Everett co-wrote the screenplay for The Next Big Thing; it was Everett's first produced screenplay, though he previously published a novel.

'Gangsta' Terrell Anderson
as Rapper No. 1

'Browski' James Reese
as Rapper No. 3

'Dutch' Amoa Chester
as Rapper No. 4

Frank James
as Dad at Airport

Marie Chambers
as Party Guest No. 1

Glenn Tannous
as Party Guest No. 3

Jessica Sara
as Kid No. 3

Katelin Petersen
as Kid No. 4

News & Interviews for The Next Best Thing

View All The Next Best Thing News

Critic Reviews for The Next Best Thing

The two stars may be great pals in life, but there's little magic in their on-screen partnership.

Never having decided whether it wants to be comedy or a sentimental hand-wringer, it tries to be both and winds up being neither.

[Madonna] can barely muster even the rudiments of human expression.

Two movies in one, and there's not enough breathing room for both of them.

After the melodrama kicks in, the film turns disastrously sappy.

The very first scene in the new Madonna movie The Next Best Thing stumbles and the movie never recovers.

This astonishingly bad tearjerker, a Fannie Hurst weepie with a gay twist, is as phony as a three-dollar bill and just about as entertaining.

Heartfelt but lightweight and inconsistent.

Audience Reviews for The Next Best Thing

Rupert and Madonna re friends who have a drunken night.

Will someone PLEASE tell Madonna to stick to the day job?? She's just embarrassing herself...and someone should tell Rupert Everett that having an english accent isn't enough to carry a film outside of the US' female demographic.

The Next Best Thing Quotes