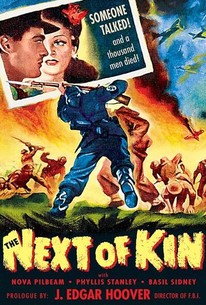 Next of Kin Photos

The phrase "Loose Lips Sink Ships" takes on a new and special meaning in the cautionary British war drama Next of Kin. In grade-school-primer fashion, the film shows how careless talk can have a devastating and tragic effect in times of war, sometimes boomeranging on the "talker" in the form of lost loved ones. Extra attention is paid the gossipy "Ma" Webster (Mary Clare), whose casual revelation of troop movements, culled from a recent visit by her son, has long-ranging, fatal consequences. American critics, unmoved by the melodramatic breast-beating of Next of Kin, suggested that the film might cause viewers to swear off moviemaking rather than talking.

Critic Reviews for Next of Kin

Thorold Dickinson as Director has imparted to this outstanding film a factual quality of which it would be hard to find the equal.

There are no featured reviews for Next of Kin at this time.

Next of Kin Quotes