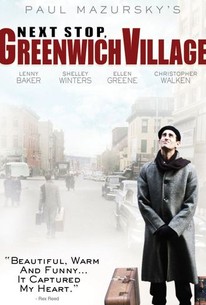 Director Paul Mazursky drew from his own formative experiences as a struggling New York actor in Next Stop, Greenwich Village. Lenny Baker plays Mazursky's alter ego, an aspiring Brooklyn-born thespian named Larry Lapinsky. When not parrying with his overprotective Jewish parents (Mike Kellin and Shelley Winters), Larry must contend with his "method"-happy acting teacher Herbert (Michael Egan); with actress Anita (Lois Smith), who is forever threatening to kill herself over imagined slights; with head-in-the-clouds Greenwich-Village poet Robert (Christopher Walken); and with Bernstein (Antonio Fargas), a black homosexual with an identity problem. Larry's future is threatened when his girl friend Sarah (Ellen Greene) gets pregnant, one of several crises facing this star-crossed couple throughout the film. Keep an eye peeled for young Bill Murray, Joe Spinnell and Jeff Goldblum in minor roles.

Joe Madden
as Jake the Poet

Jeff Goldblum
as Clyde the Actor

It's a film that does not quite make what it set out to do, but is nevertheless goodhearted and has its delicate moments.

Next Stop, Greenwich Village is a very beautiful motion picture.

A middlebrow American Graffiti, minus the music and set in Greenwich Village, 1953.

"Next Stop, Greenwich Village" isn't aggressively awful. It is inept but mostly it's just commonplace.

The movie's part autobiography and part fiction, but it's all of a piece because Mazursky captures the tone of the 1950s.

Seems more like a slavish hommage to Federico Fellini than a genuine reminiscence.

Fortunately, Next Stop, Greenwich Village is able to climb out of a cliched script - mostly due to its solid ensemble.

The picture's greatest strength rests in its characters.

Shelley Winters... gives the performance she was born for.

It's sad and very funny and blisteringly real.

Paul Mazursky introduces us to this Jewish mother, great archetype and parody of the American matriarchy, played happily by Shelley Winters, who is capable of transforming a minor role into a masterpiece. [Full Review in Spanish]

A semi-autobiographical account of a period in director Paul Mazursky's life. A funny and at times quite poignant telling of Mazursky's choice to leave Brooklyn for what he sees as the glamorous world of Greenwhich Village in 1953. He is pursuing an acting career and becomes part of a vibrant circle of friends, a very eclectic group; a blunt but kindhearted woman, a playboy (Christopher Walken,) an over-the-top funny black gay man (whose buoyant exterior hides a lot of pain,) a suicidal older actress, and the protagonist's girlfriend, who seems ever-indifferent to her lover. His parents provide much comedy, especially his overbearing mother, brilliantly played by Shelley Winters. It is obvious that Paul Mazursky has quite a love for these people as his story moves away from himself and focuses on these loveable, fascinating characters. Lenny Baker, who plays the lead, is very well-suited for the role.