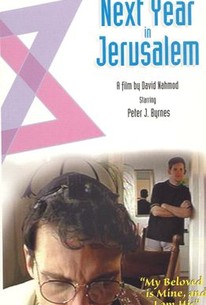 Orthodox Judaism and alternative sexualities collide in this drama about the clash between religion and gay relationships. In Brooklyn, two cousins share opposite-sides-of-the-same-coin lifestyles: Charlie is ashamed of his Orthodox heritage but not his male lovers; meanwhile, Manny is true to his faith but longs to have a gay experience. When Manny's father arranges for him to marry a young woman, however, both relatives have to own up to the aspects of their personalities they've been trying to hide. Popster Jill Sobule contributed the film's closing-credits tune.

Critic Reviews for Next Year in Jerusalem

There are no critic reviews yet for Next Year in Jerusalem. Keep checking Rotten Tomatoes for updates!

There are no featured reviews for Next Year in Jerusalem at this time.

Next Year in Jerusalem Quotes