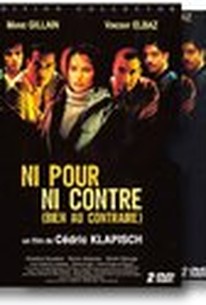 A not-so-worldly twentysomething gets caught up with some shady Parisians in director Cedric Klapisch's 2003 crime comedy-drama Not for or Against. Wallflower camerawoman Caty (Marie Gillain) is three years into her career and residency in the French capital with little to show for it in the friend category, never mind the fact she is hopelessly single. While on the job filming an interview with a prostitute, Caty gets a tip from the hooker for a quick and profitable money-making possibility. Following up on the lead, Caty meets the handsome Jean (Vincent Elbaz) who offers to pay her to film him while he robs a store. After some perfunctory soul-searching, Caty impetuously decides to take the offer. This start in crime leads her into Jean's gang of criminals, which she rather quickly becomes a member of. As the thieves tend to spend their loot about as quickly as they accumulate it, they begin planning an enormous caper that will enable them to live more comfortably -- if they manage to survive its undertaking. ~ Ryan Shriver, Rovi

Critic Reviews for Ni Pour, Ni Contre: Bien au Contraire (Not for or Against)

There are no critic reviews yet for Ni Pour, Ni Contre: Bien au Contraire (Not for or Against). Keep checking Rotten Tomatoes for updates!

There are no featured reviews for Ni Pour, Ni Contre: Bien au Contraire (Not for or Against) at this time.

Ni Pour, Ni Contre: Bien au Contraire (Not for or Against) Quotes