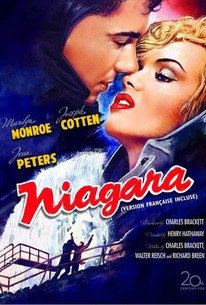 Belated honeymooners Polly (Jean Peters) and Ray Cutler (Casey Adams) arrive at their Niagara Falls cottage only to find that Rose (Marilyn Monroe) and George Loomis (Joseph Cotten) have not yet checked out. Though the Cutlers temporarily take another cabin, the lives of the two couples are bound together for the next two days. Polly discovers that Rose is having an affair and that George, though emotionally unstable, has good reason for his jealous rage. George accurately suspects that Rose openly flaunts her sexuality to make him act crazy in front of witnesses. This is part of Rose's plan: her lover Patrick (Richard Allan) will kill George and make it look like suicide or a disappearance. Instead, George kills Patrick, and he returns to kill Rose, but finds Polly instead. As she had been sympathetic to him, he asks her not to tell anyone that he is alive so he can simply disappear. But, realizing that he wants to kill Rose, Polly informs the police. What follows is escalating terror, with George stalking Rose, Rose desperately trying to leave town, the police searching for both of them, and finally George and Polly adrift in a boat heading for the precipice. In Henry Hathaway's Technicolor film noir, Niagara Falls serves as an apt metaphor for the destructive power of out-of-control carnal and murderous obsessions. ~ Steve Press, Rovi

Will Wright
as Boatman

Marjorie Rambeau
as Bit
View All

Around the scenic splendor of Niagara Falls, Charles Brackett has produced and co-scripted a gripping murder melodrama that is loaded with sex and suspense.

Niagara is a morbid, cliched expedition into lust and murder. The atmosphere throughout is strained and taxes the nerves with a feeling of impending disaster.

Obviously ignoring the idea that there are Seven Wonders of the World, Twentieth Century-Fox has discovered two more and enhanced them with Technicolor in "Niagara."

Worthseeing for Hathaway's superbly crafted direction, even if it needed a Hitchcock to merge the symbolism of the location (the falls, the belltower) with the themes of sexual domination and envy.

Technicolor is stunning, so as the set design. Rose's prolonged, almost silent murder scene is as good as it gets and puts most stylish giallos to shame.

Niagara Falls itself is featured in so many sequences that it's virtually one of the film's stars.

The film itself verges on melodrama, daft and clever by turns, with a fine performance from Cotten and some interesting location shots of the falls, but this is Monroe's star-making movie and, boy, does she know it.

The film is drop-dead gorgeous.

Wonderful location photography and color in this well-done thriller.

The Falls themselves are an ever-present backdrop, and as memorable (and integral to the plotting) as Mount Rushmore was in "North by Northwest."

This film noir in color benefits from Hathaway's taut direction, strong performances of Monroe as the adulterous wife and Cotten as the jealous hubby, and location shooting.

Some dirt and double dealings at one of Nature's most celebrated outdoor showers. Done in that hyper-pristine Hollywood Technicolor that was the style, Joe Cotton and Marilyn Monroe ruminate on the dark interpersonal of interpersonal relationships. What's notable is watching Marilyn: it is obvious that she is stretching herself, akin to watching your own child take their first steps.

The look and atmosphere in this film is so vivid that even viewed on TV it makes you feel as if you have been to Niagara Falls sometime in the early 1950s. The plot takes a deceptively leisurely pace but it builds to a gripping climax. It is worth the viewer's time & effort to stick with it to the end. Marilyn Monroe is radiantly treacherous & her performance is subtle and bears close watching beyond her obvious attractiveness. She should get a lot more credit for this picture than I've seen others give her. Joseph Cotten balances between being menacing & getting our pity & sympathy. Not all the performances are terrific but this movie is a gem that rewards the effort to stick with it to the end. 4 1/2 Stars 4 -8-13

Marilyn Monroe is the luscious femme fatale in this film noir travelogue shot on the US/Canadian border. Mother Nature provides the breathtaking backdrop for this dark honeymoon romp of deceit, deception and murder.

"Too bad. They can't play it for you now, Rose." Niagra failed to get me very interested from the very start, so you might as well know now that this won't be a very enthusiastic review. I sort of drifted through most of it, only paying attention enough to know what was going on. It's not a bad film, but I doubt I'll see it again. It takes place near Niagara Falls, as Marilyn Monroe plays an unfaithful and treacherous wife who plans to have her husband killed. A visiting couple on their honeymoon gets unknowingly mixed up in the plot, and the plan falls apart in a way that ends up putting nearly everyone in danger. This was my first Monroe movie, and while she was certainly beautiful, I found my eyes drawn to her co-star Jean Peters much more often. She stole the movie, as far as I'm concerned. I'd say that discovering her made the movie worth my time, I'm certainly going to check out more of her work. Other than that, I found Niagara to be a pretty forgettable thriller set in a very beautiful place, and even the gorgeous surroundings aren't really taken advantage of on the screen. Some movies just don't catch a person's interest, for whatever reason, and Niagara is the most recent example of that, for me.