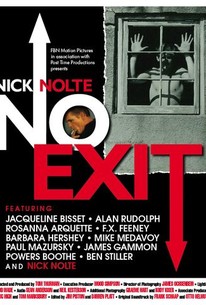 Nick Nolte offers a unique glimpse into his life and his art in this documentary. In Nick Nolte: No Exit, the respected actor appears both as himself and as a television journalist who is interviewing Nolte for a film on his career. The smart-suited reporter grills the slightly scruffy actor about his youth, his early days in Hollywood, his rise to stardom, his working methods, his influences and his occasional run-ins with the law. Along the way, the two Noltes watch film clips from some of the actor's more celebrated roles, and some of his friends and colleagues discuss their experiences with Nolte via the internet, including Ben Stiller, Barbara Hershey, Rosanna Arquette, Powers Boothe and Jacqueline Bisset. Nick Nolte: No Exit received its world premiere at the 2008 Karlovy Vary Film Festival. ~ Mark Deming, Rovi

There are no critic reviews yet for Nick Nolte: No Exit. Keep checking Rotten Tomatoes for updates!

There are no featured audience reviews yet. Click the link below to see what others say about Nick Nolte: No Exit!