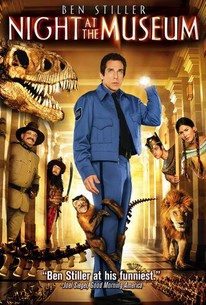 Critics Consensus: Parents might call this either a spectacle-filled adventure or a shallow and vapid CG-fest, depending on whether they choose to embrace this on the same level as their kids.

Critics Consensus: Parents might call this either a spectacle-filled adventure or a shallow and vapid CG-fest, depending on whether they choose to embrace this on the same level as their kids.

Critic Consensus: Parents might call this either a spectacle-filled adventure or a shallow and vapid CG-fest, depending on whether they choose to embrace this on the same level as their kids.

Night at the Museum Videos

Night at the Museum Photos

Larry Daley, a down-and-out dreamer whose imaginative ideas have never paid off, finds himself in desperate need of a job. Larry has always believed he was destined for big things. But, he has no idea just how literally gargantuan and hairy a challenge he will face when he grudgingly accepts the supposedly menial graveyard shift as a security guard at the Natural History Museum. On his very first night on the job, Larry is handed an over-sized flashlight and a dog-eared instruction manual, then left all alone in the eerily quiet, cavernous museum. At least, he thinks he's alone. But wait, what's that noise? To his utter astonishment and disbelief, Larry watches in shock and awe as, one by one, the primeval beasts and storied icons that surround him stir magically to life--and total havoc ensues. Now, as Tyrannosaurus Rex and Attila The Hun carve a swath of destruction through the marble corridors, and lions and monkeys prowl the fragile exhibits, Larry is at a loss as to how to get the museum back under control. At his wit's end, Larry must recruit the help of historical heavyweight Teddy Roosevelt just to survive the night. Facing the possibility of losing his job and letting down his son Nick yet again, Larry must wage an incredible battle to save the museum, hoping to become at last the bold, adventurous dad he's always wanted to be. The man who's been forever waiting for his moment of greatness just found it.

Patrick Gallagher
as Attila the Hun

Dan Rizzuto
as Neanderthal No. 2

Matthew Harrison
as Neanderthal No. 3

Jody Racicot
as Neanderthal No. 4

Darryl Quon
as Hun No. 2

Gerald Wong
as Hun No. 3

Paul Chih-Ping Cheng
as Hun No. 4

Nico McEown
as Friend No. 1

Meshach Peters
as Friend No. 2

Critic Reviews for Night at the Museum

It's a better than average CGI-fest, more often silly than funny. But it makes some good points about courage, self-respect, and the importance of learning about history.

With this cast, there should be more laughs, and that blame falls partially on the script, but equally on how awfully Levy paces the film.

Dark night of the soul is more like it.

What a dull, nice movie, wrenched from a wild premise and battered into docility.

A film that veers, often without much direction, between a family-friendly comic romp and an attempt to touch our souls with heartfelt emotion.

As mindless spectacle, this is reasonably entertaining.

Fifteen years after its release, Night at the Museum is still a fun time.

Thankfully, the special-effects used to simulate the static exhibits coming to life (dinosaurs, statues, warriors etc) are both strong and varied enough to prevent a totally worn-out welcome.

A cinematic lump of coal.

The film is so visually appealing, it's a credit to "Museum" despite the fact the movie has a flimsy plot full of hokey clichés and contrived plot advancements.

One of the most neutrally adequate blockbusters of the modern age.

Audience Reviews for Night at the Museum

You'd think that with such a ridiculous premise and with such cheesy humour that "Night at the Museum" will go down in flames, and although there are many moments that do, this is still a very fun family film that can be enjoyed any time. No, it does not break any new ground, but the sure joy that comes from watching all of these things and people come to life was a blast to see unfold. After many dead ends throughout his life, Larry Daley finds himself being hired as a night guard at the Museum of Natural History and it is his job to keep it secure once he finds out that all hell breaks loose at night. I think I have more fun watching this than I should, but it really is just a harmless family adventure that has it's moments. It is funny when it needs to be (even if it does go a little overboard) and it's charming when the charm feels necessary. "Night at the Museum" earns a mild recommendation.

Ben Stiller is Larry a security guard in a museum. He discovers the exhibition characters come alive at night. The characters are all great especially Owen Wilson as the Cowboy and Robin Williams as President Teddy Roosevelt. They have to stop the retired security guards from stealing the treasures that bring them to life. Good to see Dick Van Dyke as one of the security guards,

I normally dont like Ben stiller but this was a nice movie and very enjoyable.

Night at the Museum Quotes