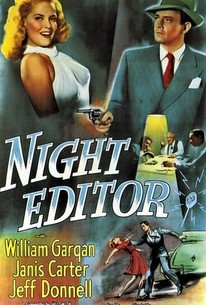 Inspired by the radio program of the same name, Night Editor features Charles D. Brown as the editor of the New York Star. In flashback, the editor tells the tale of police lieutenant William Gargan, who forsakes his happy home life for the love of no-good society dame Janis Carter. Both Gargan and Carter begin cheating on their respective spouses, and while on a romantic rendezvous the couple witnesses a murder. They can't report the crime without revealing their own infidelities, a dilemma which leads to blackmail, double-crossing and a second murder attempt. A twist ending caps this snappy little 65-minute morality play. The script of Night Editor was based on the story "Inside Story" by Scott Littleton, previously dramatized on the Night Editor radio series.

Michael Chapin
as Doc as a boy

It may be short on style but the low budget gives the night scenes a dark austerity and the web of lies and corruption gives it a real noir dimension of cheap, tawdry lives

Inspired by the radio program of the same name.

sleazy and low down like every noir should be. janis carter is ridiculously good here