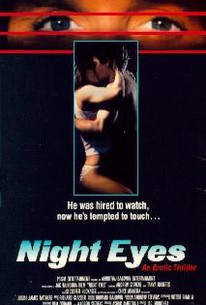 This mystery thriller is the first in a series of soft-core direct-to-video features co-created by star Andrew Stevens. Stevens plays Will Griffith, the owner of a high-tech Los Angeles security and surveillance company. Will is hired by Brian Walker (Warwick Sims), a rock star undergoing a messy divorce from his philandering wife Nikki (Tanya Roberts). Will's job is to rig the Walkers' home with burglar alarms and most importantly, video cameras that will capture Nikki's frequent trysts with various lovers. As Will gets to know Nikki better, however, he grows attracted to and protective of her, eventually embarking on a kinky sexual affair. When the jealous Brian discovers their relationship, he breaks into the home enraged, forcing Will to kill him in self-defense. Everything is not as it seems, however, and events unfold that force Will to realize that he has been a stool pigeon. Night Eyes (1990) was followed by several sequels featuring Stevens in the Will Griffith role, usually opposite leading lady Shannon Tweed.

Andrew Stevens
as Will Griffith

There are no critic reviews yet for Night Eyes (Hidden View) (Hidden Vision). Keep checking Rotten Tomatoes for updates!

There are no featured reviews for Night Eyes (Hidden View) (Hidden Vision) at this time.