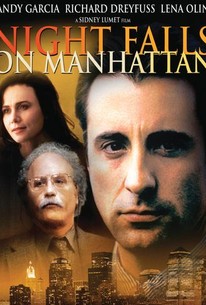 The delineation between good and evil and cops and robbers is tantalizingly unclear in this intelligent and cliche-free crime drama from Sidney Lumet that is based on Tainted Evidence, a popular novel from Robert Daley. Two members of New York's finest are about to bust one of the city's most powerful drug lords when something goes terribly awry. The ensuing shoot-out involves three precincts, and, following the dealer's escape, three officers are dead and one is critically wounded. Later the pusher turns himself over to prominent defense lawyer Sam Vigoda (Richard Dreyfuss). The politically ambitious district attorney Morgenstern (Ron Liebman) appoints promising rookie lawyer and ex-cop Sean Casey (Andy Garcia) to prosecute the dealer. The catch is that Sean is the son of the badly wounded cop, 37-year veteran Liam Casey (Ian Holm). Sean is talented but no go-getter; he is also extremely naive and truly believes that all cops are honest, especially his own father. The case goes smoothly, Sean wins, his father survives, and he even finds himself the object of a young woman's affection. Things are going great until a corpse is fished out of the harbor and poor Sean finds himself caught up in an increasingly tangled web of corruption and deceit that leaves him unable to make much distinction between the police and the criminals.

James Murtaugh
as Man in Asylum

David Wolos Fonteno
as Captain No. 1

John Seitz
as Captain No. 2

Stephen Beach
as Cop No. 2

Vincent Pastore
as Cop No. 3

Robert Sean Miller
as Captain No. 3

Clark D. Williams
as News No. 1

Tamara Phillips
as News No. 3

John DiBenedetto
as Patrolman No. 2

Kaity Tong
as TV Newsperson No. 4

Jack Cafferty
as TV Newsperson No. 3

Bill Boggs
as News No. 2

Donna Hanover
as TV Newsperson No. 1

Allen Collodow
as Cop No. 1

Dennis Paladino
as Cop No. 5

Mike Cammallere
as Sergeant No. 1

Jim Mauro
as Lieutenant No. 1

Salvatore Paul Piro
as Cop No. 4

Mike Sheehan
as Sergeant No. 2

Joe Mosso
as Lieutenant No. 2

Teddy Coluca
as Reporter No. 1

Roslyn Cohn
as Reporter No. 2

Elliot Cuker
as Reporter No. 3

Kristina Lear
as Girl in Restaurant

Catherine Schreiber
as Sean's Assistant No. 2

Bobby Cannavale
as Vigoda Assistant No. 1
View All

Its maker's best since 1988's Running on Empty and maybe even '82's The Verdict.

It is about characters who have held onto what values they could while dealing in a flawed world. It has characters who do wrong and are therefore bad, but it doesn't really have "villains'' in the usual movie sense of the word.

Lumet give us a persuasively detailed and emotionally intense film that brings out the best in just about everybody involved.

Garcia gives one of his richest performances yet

The kind of tough-minded moral drama that Lumet excels at.

Garcia turns in a solid, emotionally complex performance, and he keeps the audience involved when the plot takes some credibility-straining turns.

One of the most unfairly overlooked Hollywood films of recent years, [it] marked a return to form for one of American cinema's great moralists.

Makes the important point that our values don't just determine what we do but who we are.

great film, not a classic but a Lumet film nevertheless. The acting is very strong and the tale of corruption through the police and political side is interesting. makes me wish they created more of these films.

It's overstuffed with plot, characters, and speeches (so many, many speeches). Like most of Lumet's later work the film plays like a poor imitation of his earlier and better morality thrillers.

When I came across the move, the synopsis of this Lumetic flick didn't appeal to me as it sounded familiar. Despite of the fact, hardly having any better options (going by my last couple of ratings, one may deduct that it's becoming harder to please ME!!), I gave it a go. But I was determined that if it starts sucking, and doesn't get better soon, I'll stop right there. To my surprise, this mediocre drama entertained me more than the previous disappointments. It's so good that I now look forward to coming across other intriguing films. Yeah, I was kinda bored with more films than less, regardless of their ratings. The frequency of watching films was gradually getting lower and lower, and II was on my way down the ladder, but this one stopped me. One of my problems was that no matter what film it is, I found them quite predictable, and repetitive more ofter than not to keep me engaged. Writers' block is understandable, but I can't just sit by and enjoy it all the same. In fact, just a few days ago, I'd thoughts on remakes. I don't mind them too much, but when "it's a remake of. XYZ" plays a major part in its promotion, it repels rather than attract me. I'd rather go watch the original, and let the remake be. But then it struck me that original ideas may be hard to get to, but at least a better execution can make the difference. Besides, it should only borrow the main theme of the original, and then present it with fair execution to offer an entertaining piece, and that too not being promoted as a remake. The theme here is not a new one, but the execution made difference for me. I liked how the movie started, and hardly fell apart at any point. It kept things going, and while predictable, it still remained interesting. Add to it, the unexpected (not quite so now when I come to think of it, and apparently not applicable to everyone) moments leading to the culmination. It turned over almost everything I'd predicted as what would be next, and I liked it for a change. Ignoring the release year may have helped there, but I liked it no matter what. Performances were first rate, and as mentioned before, after a long time, I've found a satisfying movie. But BEWARE: The reason may not (only) be that it's really a good one, but that: I hadn't seen a worthwhile movie for quite long, OR May be I was expecting more than I should have, OR Simply that I was having a nice time (another rarity these days around), and watching it under favorable conditions. For good or otherwise, I can only hope my audience's block won't make me quit watching films. Zzzzzzzzzzzzzzzzzzzzzzzzz

It looks like a great cast under the direction of Sidney Lument. There are some good scenes that deal with gray areas encountered by cops and lawyers, but too often the story became dull or over emotional without giving us reason to care for the characters. Garcia is an assistant D.A. in training, who rises impossibly quickly to D.A.. His father is a cop played by Ian Holm. He dates Lena Olin from a competing law firm that is headed by Richard Dreyfuss's character. Even though Dreyfuss is top billed he doesn't play a large roll in the story. He only succeeds in setting Garcia's character on the path of helping Internal Affairs uncover a corruption ring, which included his father's partner and the take down of the drug dealer/cop killer from the trial early in the movie.