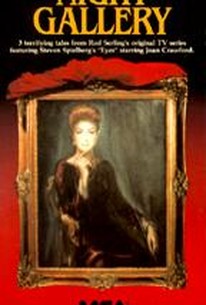 In the pilot of the television series "Night Gallery" (1970), Rod Serling introduces three separate paintings, each with its own story of uncanny vengeance against evil to tell. The first involves a black sheep nephew (Roddy McDowall) who murders his rich uncle to inherit his fortune - both much to the detriment of the uncle's butler (Ossie Davis) - only to find that vengeance extends beyond the grave. In the second story, a rich, heartless woman (Joan Crawford) who has been blind from birth blackmails an aspiring surgeon and a man who desperately needs money to give her a pair of eyes which will allow her to see for the first time - even though for only half a day's time - only to have the plan backfire on her in ways she never imagined. In the third story, a Nazi war criminal (Richard Kiley) is hiding from the authorities in South America, where he is confronted with his past demons and a curious Holocaust survivor (Sam Jaffe) and finds solace only in a serene painting in a museum, wanting nothing more to enter into that world and stop running.

There are no critic reviews yet for Night Gallery . Keep checking Rotten Tomatoes for updates!

Learn the definition of "irony" with these stories from the Master: Rod Sterling. This show influenced all dark fantasy that came after.

The last segment is okay but the first two are a couple of the best suspense dramas of 70's TV.