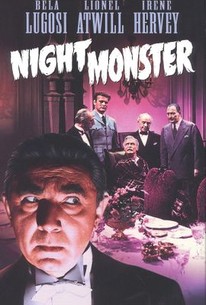 Reclusive Kurt Ingston (Ralph Morgan) finds himself playing host to an extraordinary array of guests at his decaying old mansion. Among the medical guests are psychiatrist Lynn Harper (Irene Hervey), who is there to evaluate Ingston's daughter Margaret (Fay Helm), whose sanity has been called into doubt over her claim that she has seen some sort of inhuman fiend stalking the grounds after dark; and then there are doctors Timmons (Frank Reicher), Phipps (Francis Pierlot), and King (Lionel Atwill), all well known to Ingston -- for the botched operation that left him crippled for life; and then there's the mysterious Agor Singh (Nils Asther), a mystic with a strange hold on Ingston. When these people start dying grisly deaths, hero Dick Baldwin (Don Porter) must figure out how these seemingly impossible killings are being carried out, and by whom, despite clues that appear to lead nowhere. Hovering over the proceedings, in one of his least rewarding roles at Universal, is Bela Lugosi playing Rolf the butler. Needless to say, Rolf -- because he is played by Bela Lugosi -- seems to be hiding some mysterious connection to the strange goings on. And the presence of Lionel Atwill is a similar "clue" put before audiences by the movie's makers, which helps to make Night Monster lots of fun, if not always logical. Additionally, future star Leif Erickson cuts a memorable figure as a menacing chauffeur; and Fay Helm, perhaps best remembered today as the disturbed mystery woman in Robert Siodmak's Phantom Lady (1944), dominates the serious acting with her portrayal of the seemingly insane sister.

Bela Lugosi
as Rolf the Butler

Leif Erickson
as Laurie the Chauffeur

Cyril Delevanti
as Torque Gateman at the Estate
View All

Before this potpourri of occult mumbo-jumbo runs its tedious and fantastic course no less than eight normally healthy looking actors wind up as corpses.

The stage is set for a series of murders that's followed by a wild denouement.

The film is delightfully over-the-top -- as when we find Fay Helm raving that the whole house "reeks" of blood about a minute into the movie.

There are no featured audience reviews yet. Click the link below to see what others say about Night Monster (House of Mystery)!