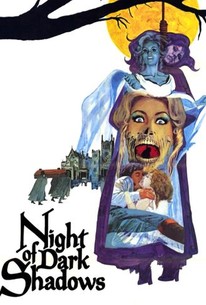 This is the second full-length motion picture feature based on the popular television soap-opera/horror melodrama Dark Shadows. The first film was House of Dark Shadows. This film lacks the grand guignol glee provided by Jonathan Frid and Joan Bennet. However, it has a new storyline, not a rehash of one previously explored in the television series. Here, artist Charles Collins (David Selby, who performed the same part in the TV series) brings his new bride to live in the family mansion, which he has just inherited. The gentle and sensitive young Collins, the last of his clan, has troubled sleep. He dreams of the past, of his family, and of the house. Perhaps his dreams are not just dreams? Increasingly deranged by these visions, it begins to look like he will re-enact the atrocities committed by his family in the past. It is interesting to note that the film uses the mansion of 1890s railroad robber/baron Jay Gould for its setting.

Night of Dark Shadows is bad, all right, but not merely bad. It is also shabby and unwholesome, made by people who take no joy in their work. It is a mean, evil little enterprise.

A modest exploitation supernatural tale, that seems better suited to be soap opera day TV fare than a feature movie.

There are no featured audience reviews yet. Click the link below to see what others say about Night of Dark Shadows!