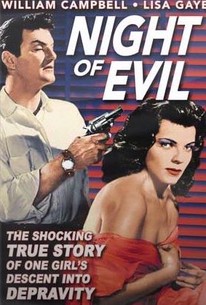 In this campy melodrama, a high school girl gets involved in the wrong crowd, and though innocent of wrong doing is sent to reform school. Soon after her release, she enters and wins the Miss Colorado contest, making her a contender for the Miss America title. Not long after winning the state pageant, she falls for and secretly marries an ex-convict. Unfortunately, he isn't reformed and is arrested for attempted kidnapping. When that happens, his secret marriage to the woman is exposed and she is publicly disgraced. The woman is distraught and becomes a kooch dancer. Her depression continues and this leads her to buy a gun and try to kill herself. Unfortunately, she fails. Later she tries to rob a drugstore, but ends up in prison.

Critic Reviews for Night of Evil

This badly acted and conceived exploitation film is strictly a drive-in staple.

There are no featured reviews for Night of Evil at this time.