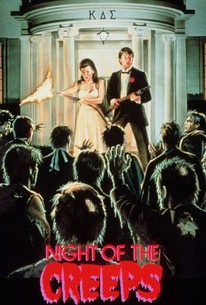 Night of the Creeps Videos

Night of the Creeps Photos

Three points for that title alone! But Night of the Creeps has a lot more going for it; this maiden directorial effort by Fred Dekker is a dextrous amalgam of sci-fi, horror, and laughter. Nerdish college freshmen Jason Lively and Steve Marshall pledge to a fraternity, hoping to scope out the best chicks. As part of their initiation, the boys must sneak into the college's medical center. Here they find the frozen remains of a boy who swallowed an alien slug (that's right, operator) back in 1959. The corpse thaws, the space slugs are unleashed on campus, and.....AAAAAAHHHHHH!!!!!! You gotta love a low-budget scarefest that names all of its characters after horror-film directors: Romero, Cronenberg, Cameron, Landis, Hooper, Raimi, and on into the night. And what would a "retro" terror flick from the 1980s be without the supporting-cast presence of the ubiquitous Dick Miller?

Tex Donaldson
as Cop Outside Sorority

Robert Kerman
as Policeman with Searchlight

Elizabeth Alda
as Cop in Alley

David B. Miller
as Beta Zombie

Alexander Folk
as Cop in Morgue

News & Interviews for Night of the Creeps

View All Night of the Creeps News

Critic Reviews for Night of the Creeps

...a decent (if somewhat lackluster) homage/throwback from filmmaker Dekker.

It's a great mix of wit, character work, genre-blending and, perhaps most importantly, it has a great sense of timing and pacing.

If the film falls well short of greatness, it is due to the director's inability to step outside himself as a horror fan and deliver a film that is effective on its own terms, rather than simply trading on the past greatness of the classics.

Night of the Creeps lacks the cynicism of a typical 80s horror flick, and it's almost wholesome as far as movies about nerds pursuing a hot girl out of their league go.

Sit back, relax, at let your brain get slowly munched-on.

Far from a forgettable slice of schlock... Night of the Creeps will nestle in your brain for years to come thanks to its embracing of the genre. It'll make you laugh, it'll make you squirm, and it'll leave you screaming like a banshee.

This is a terrific B-movie, full of genre love and filled with tributes to Dekker's horror movie heroes...

Scattered across the whole of Night of the Creeps is horror-nerd nirvana.

I remember sort of loving it when I was twelve, meaning only that twelve-year-olds are idiots.

Audience Reviews for Night of the Creeps

there are two particularly nice ways that your senior prom can turn out. one way is that you go with your sweetheart, grow deeper in love with them, learn how special and limited your time with them may be and decide you will marry them someday, then you take her home and make love to her for the first time. the other fun way to spend prom, which is what i experienced, is to go two hours late smelling like weed, not talk to anyone except the people you hate, take all the cookies from the snack table home with you, wrapped in napkins in your pockets, and eat them home alone while making yourself smell even more like weed. if your experience turns out like the first example, then i hope your prom date's head doesn't unzip like a banana peel and release a family of slugs. because then you will have to use the second plan. but it could be a bit hard to get high after witnessing this so i hope that you stick to plan B from the very beginning.

Oh how I love these tacky cheesy old 80's 'video nasty' horror's hehe the stuff of late night legend when your parents were out with friends for the evening and you were alone with the babysitter who was slightly too young and had no idea how to really care for you lol!! This is just what you ordered for retro crapola, the effects are now abit iffy but still amusing and quite effective for the film (kinda), its just nice to see makeup and real handmade craftsmanship for the blood n gore instead of cgi boredom. The plot of course is out there and I don't think I even need to go into it, cast are pretty much unknowns accept for 80's legend Jason Lively who is OK, the rest are just the usual teen fodder. Its decent enough and was pretty scary back in the day but now its like watching funny archives :) worth alook for the makeup.

Maybe it's my love for the very-well made Monster Squad or maybe I'm just not a proper horror film fan, but I found this to be very lackluster and disappointing. This movie takes absolutely forever to get going and by the time it does, it's over. I can't get behind this one, unfortunately. I had been looking forward to seeing it for years, but it turns out to be not the highest of quality in both horror and camp. A serious let-down....and yes, I did watch the Director's Cut.

Night of the Creeps Quotes