Night of the Living Dead1968 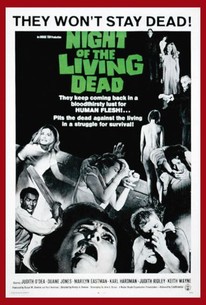 Night of the Living Dead Videos

Night of the Living Dead Photos

One can only imagine the impact that Night on the Living Dead had on unprepared audiences of 1968. Here was a film that began with a semi-comic scene in a graveyard in broad daylight -- which was suddenly interrupted by the homicidal appearance of a seeming lunatic. Gradually the audience comes to the horrible realization that the attacking looney is a zombie, one of several "living dead" recently arisen from their graves -- and that they roam the earth in order to chow down on human flesh. Seven people with whom the audience identifies barricade themselves against the zombie invasion. The only way to destroy the attackers is to set them afire; the trick is to get the zombies before the zombies get them. Filmed in Pittsburgh on a $150,000 budget by former industrial filmmaker George Romero, Night of the Living Dead was denied a release by Columbia on the grounds that it was shot in black-and-white, and was turned down by American-International because of the film's bleak, unhappy ending. Romero turned to Walter Reade Associates, which unceremoniously dumped the film onto the kiddie matinee circuit. After attending a screening with an audience of scared-witless youngsters, a mortified Readers Digest journalist printed a scathing condemnation of Night of the Living Dead -- an article that had the immediate effect of arousing the interest of moviegoers who might otherwise have ignored the film. One of the first of the "midnight movies," Night of the Living Dead still packs a wallop today, even in the light of the more-convincing special effects indigenous to the Halloween, Friday the 13th and Nightmare on Elm Street flicks of the 1980s. That the threadbare, amateurish production values of the original Night of the Living Dead added to its authenticity was proven by Romero's 1990 remake, which despite its bigger budget, color photography, explicit violence and superb makeup work, was nowhere near as frightening as the 1968 version.

Critic Reviews for Night of the Living Dead

Night of the Living Dead is taut and uncompromising, ending on a note of bitter irony. Performances are adequate and often better, especially in the case of Jones, who clearly has what it takes to go on to bigger things.

Romero was offered a budget for colour; he preferred shooting in black and white; the result is a flat murky ambience which is perfect for the ramshackle American Gothic landscape where the events occur.

The title immediately cues a tale of horror; but does not prepare one for the shocking treatment of the dead... The theme could not be in poorer taste.

Romero conjures moments of eeriness and dread throughout, keeping the lighting low and the special effects to a minimum, though there will be blood, fire, cannibalism and a great deal of death.

The immediate, quasi-documentary feel, a result of budgetary constraints, actually served the film's horror, jolting audiences because it all seemed just a little too real.

If [Romero's] original vision of the undead looks dulled by today's standards, his embedded political commentary on racism feels just as sharp.

It is not only the legacy that Night of the Living Dead leaves that makes it a classic but also its examination of the instant removal of humanity.

A landmark of American cinema. Intentional or not, the film's sociopolitical content remains as potent as ever.

This was an American horror movie, so it needed no English accents or familiar character actors. It was grim and unflinching...

The simple setup, stark black-and-white photography, limited resources, and eerie music give the film an effectiveness not often found in such minimalist ventures.

Mike Massie
Gone With The Twins
View All Critic Reviews (75)

Audience Reviews for Night of the Living Dead

A landmark in so many ways, still capable of inducing horror - and to do so after countless years, after countless viewings. One of the greatest horror films ever. The cheapie production values only add to the sense of inescapable doom.

Romero's first film - and his first zombie movie - is creepy, gory and realistic, with an extremely disturbing atmosphere, an incredibly sharp sociopolitical commentary and a terrifying ending, even though the acting is not that good and the plot feels a bit repetitive.

A family, a man, and a woman hold up in a farmhouse as they try to survive an attack of zombies. I should forgive this 1968 classic for its poor special effects, its misogyny, its predictable character types, it plot holes, its overwrought performances, and its lack of any ethical raison d'etre. But I don't. The female characters are all useless fools, and why doesn't the old lady in the attic ever wake up and attack the group of survivors? If the dead are walking and she's dead, why isn't she walking? Was her brain damaged? If so, that wasn't clear. Overall, while it's a horror classic, there have been improvements on this genre that have made it archaic.

With some visually impressive images for it's time, and being one of the first films to have a boarded up home, fighting zombies away, "Night of the Living Dead," to me, was the spark of the genre. So many good films have come from this genre, and even dating all the way back to this picture, it's terrific entertainment. Although it becomes a tad slow at times, it still manages to hold your attention well and send chills down your spine with it's practical effects. The acting is solid for it's time and the story is well played out, but the most commendable thing about this film is it's direction. George A. Romero truly knows how to handle his actors, and each zombie does not feel out of place. All around, it's a great film, albeit simple. "Night of the Living Dead" sets a bright future for this filmmaker!

Night of the Living Dead Quotes