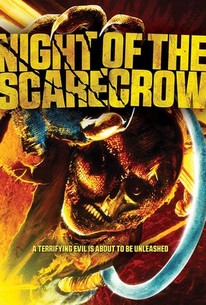 This is a '90s version of a good old fashioned B monster movie. It is set in a small rural town that is outwardly upright and peaceful and is inwardly rotten to the core. It seems that in its earliest years, the town fathers made a devil's bargain with a wandering warlock to insure good crops and prosperity for the residents. They soon came to regret the deal and decided to murder the magician and bury his bones in a field. The trouble begins in modern times when the hellish bones are inadvertently unearthed thereby freeing the warlock's evil spirit which immediately takes over a scarecrow and goes on an unequaled killing spree. The strawman's handiwork is discovered by young lovers Claire and Dillon. They soon find themselves pursued by the demonic creature, but eventually they knock the stuffing out of him and destroy the evil spirit, but not before more creative murders and mayhem ensue.

Duane Whitaker
as Deputy No. 1

Joe Unger
as Deputy No. 2

John LaZar
as Warlock
View All

Critic Reviews for Night of the Scarecrow

There are no critic reviews yet for Night of the Scarecrow. Keep checking Rotten Tomatoes for updates!

Audience Reviews for Night of the Scarecrow

There are no featured audience reviews yet. Click the link below to see what others say about Night of the Scarecrow!

Night of the Scarecrow Quotes