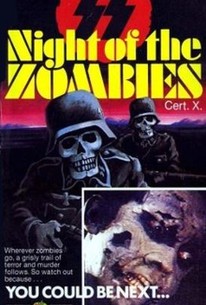 This low-budget, much-released horror film first saw the light as Gamma 693 in 1979, was resuscitated as Night of the Wehrmacht Zombies in 1981, and rose again in 1983 as Night of the Zombies. Although the film has titles that spring from a long tradition, its story is about some U.S. and German soldier "zombies" who were wounded in World War II but had their lives extended with the top-secret gas Gamma 693 -- so technically, the soldiers are not zombies at all. There are only two catches to the soldiers' existence: they must dine on human flesh in order to keep on living (making them ghouls), and they are still fighting World War II. Talky and static, but with outrageously silly dialogue and a send-up of films on global intrigue, Night of the Zombies was the last film made by director Joel M. Reed. For the trivia buffs, the word "zombie" comes from the Bantu language of Angola ("n-zumbi," meaning ghost or departed spirit), zombies debuted in 1929 in The Magic Island by William B. Seabrook, and the 1932 classic White Zombie established the genre in film.

Shoshana Ascher
as The Prostitute

Richard Carballo
as Man in Bar

There are no critic reviews yet for Night of the Zombies (Battalion of the Living Dead)(Gamma 693)(The Chilling)(Sister of Death). Keep checking Rotten Tomatoes for updates!

Nearly a bad ass movie. Was excellent when I watched it agggggges ago with mates and popcorn.