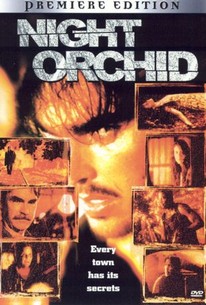 A man with supernatural gifts meets his match in this suspenseful independent drama. Clay Doyle (Dale Paris) is a drifter with an unusual psychic talent -- as he puts it, "Places talk to me," and when Dale visits someplace he's never been before, he can see the violent acts that occurred there in the past. Clay wanders into a small Florida town, where he becomes fascinated with the community's strangely picturesque decay. Clay takes a job pumping gas and meets a beautiful but enigmatic woman named Sarah Miller (Alyssa Simon). Clay is immediately attracted to Sarah, but there is something odd about her that he can't quite place. He soon discovers that the town is hiding a terrible secret -- and that Sarah has unusual paranormal abilities of her own. Director Mark Atkins completed Night Orchid while finishing his undergraduate work at the University of Central Florida; his roommate at the time was Michael Monello, who went on to produce The Blair Witch Project.

May Ellen O'Brien
as June Mable

The kind of movie that you'll catch one night on cable at 1:45 AM and be stunned when you actually like it.

There are no featured audience reviews yet. Click the link below to see what others say about Night Orchid!