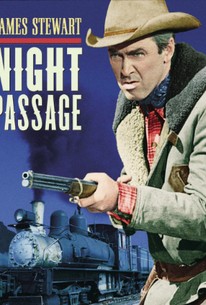 Night Passage is so similar in spirit to the successful collaborations between star James Stewart and director Anthony Mann that it comes as a surprise that this film is directed by James Nielson. Stewart plays Grant McLaine, ex-railroad employee and the level-headed brother of firebrand gunslinger The Utica Kid (Audie Murphy). When Grant is entrusted to guard a train delivering $10,000, The Kid's gang holds up the train and steals the money. Grant takes off to hunt his felonious brother down and attempts to convince him to go straight. Unfortunately, The Kid refuses, and the brothers face off in a showdown.

Audie Murphy
as The Utica Kid

Herbert Anderson
as Will Renner

Guy Anderson [Herbert]
as Will Renner
View All

A lot of the well-worked ingredients of six-gun drama are aptly packed in, along with some beautiful Colorado scenery, in wide-screen and color -- plus James Stewart.

Neilson wades through the good brother/bad brother plot like an ox through mud, Stewart whiling away the time by playing accordion.

Routine direction by Neilson fails to create any sparks from the hackneyed material.

Flatly tells the familiar tale about two brothers, one bad, one good.

Aside from the sibling angle and great character acting, this is about as forgettable as any James Stewart western could be.

Jimmy's good but this is just another western.