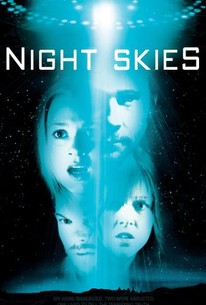 On March 13th, 1997 one of the largest UFO sightings ever recorded took place across the southwestern United States. The event became known as the 'Phoenix Lights' and was witnessed by community leaders, members of law enforcement, as well as thousands of everyday citizens. This true story, based on transcripts from actual hypnosis-therapy sessions, finally reveals what happened after the infamous incident ended and how six people, stranded by chance on a forgotten road, encountered more than just lights in the sky.

Plot devices go unused, the dialogue is rambling and nothing is accomplished.

This is clearly the sort of story that demands the big-budget Hollywood treatment...

Despite its small handful of quality components, Night Skies is a pretty standard affair.

This movie is meant to make you think. Yet, how come it made you not want to watch it after the first Boring-Thirty Minutes? I liked it sense of dependency on the UFO lovers, but it didn't really reach out to the Mainstream audiences, in which most films are apreciated. I can honestly say, I am a part UFO Fanatic, But I am not obsessed. I also relatively, yet tradgicly enjoyed this film's failed attempt at being the next "Close Encounters". It was a big upset. If you Understood it's poorly and Drool way of explaining it's plot points and the true, yet the oddly enough events that occured On March 13, 1997. To claim these testomonies, and tales of these people is hard to say, yet Honestly to Refute the "Phoenix Lights"? I have no reason, Do you.?

As much as I hate to admit it, aliens creep me the fuck out. It's probably the simplistic form they usually take, their silence, and yet knowing how intelligent they are. Even a low budget, shoddily acted bit of hokum like Night Skies, has enough to unsettle me for the most part. A lot of it is in the amateur leagues, but the director certainly has an eye for sticking stuff in the background. It gets even creepier when we see things that the characters don't. It's a shame that there's such a bombastic musical score to ruin a lot of the intensity. It's tolerable when it keeps itself simple, but when it goes aliens overboard it loses the mystery.

I have a bit of a soft spot for low-budget alien abduction features, and can forgive almost any problems that arise because of the budgetary limitations. This, however, cannot be said for Night Skies. It wasn't so much the budget, but the lame-ass script and sad (lack of?) direction that sank this one for me. Don't waste your time or money - see Altered instead.

This movie was definitely gonna get a lower score than it did. It was a pretty terrible movie throughout and they took close to an hour to involve the aliens into the movie (in a significant way), what happens in the hour preceding the alien don't ask me. All I remember was some guy getting a knife stuck in his shoulder and the hot Ashley Peldon and AJ Cook (yummy) other than that nothing of interest happened. I really wanted the aliens to examine the humans and it looked like it wasn't going to happen but it did thankfully and that's what got the movie from 1 star to 2 stars. While the examination scene could have been a million times better it could have also been equally as bad. So you're not missing anything if you don't see this movie so watch at your own risk, but beware you're going to be in for a bad (and very bumpy) ride.