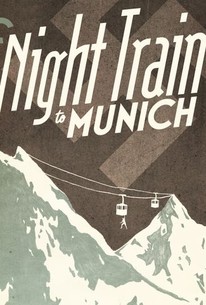 Based on the book Report on a Fugitive by Gordon Wellesley, this is an espionage film that has been stated by critics to possibly be among the top ten spy movies ever made. Replete with intrigue and suspense, the movie has all of the principles on a train as a scientist's daughter joins forces with Allied intelligence in a rescue effort involving top secrets. This movie, made just prior to WWII, gave a more temperate view of the Nazis than later movies.

On DVD This Week: Now You See Me 2, South Park, and More

Takes awhile to catch fire. It's always engaging, though, and builds by stages to a riveting climax at the Swiss border that would have done the Master of Suspense proud.

Yarn is not only told without a single letdown, but it actually continues to pile up suspense to a nerve-clutching pitch.

The cast and script are fine, but Reed fatally lacks Hitchcock's light, witty touch and his effortless ability to create suspense out of ordinary circumstances.

Reed's direction lacks the light touch, but he makes good use of the train, and there's an exciting climax set in a cable car.

Although Margaret Lockwood is merely a stock version of the usual damsel in distress, Reed's Night Train to Munich features a winsome Rex Harrison and should certainly interest aficionados of WWII propaganda cinema.

A thoroughly engrossing movie that welcomes its audience to thrill at the ever-shifting character loyalties and small victories of its heroes.

A cheeky comedy caper with the Nazis as the fall guys. I like the idea of this movie more than the one they made.

Often described as a film made in the style of Alfred Hitchcock, Carol Reed's WWII-set Night Train to Munich certainly shares common ground with the Master of Suspense's 1938 gem The Lady Vanishes.

It's fast, furious and funny but, even with that master of atmosphere Carol Reed as director, it could have done with a couple of fresh tricks to keep us guessing.

What is does offer is a mix of wit and wiles, a genuinely startling sequence in a concentration camp... and sprightly performance by Rex Harrison...

It's cross and doublecross in the days immediately preceding WW2 as a scientist and his pretty daughter become the pawns between two competing countries. Paul Henreid is smoothly excellent as the savvy and smooth rep for the Axis Powers, nearly unbeatable. And Rex Harrison is the guy for the Allies, w/o a prayer to go on. Carol Reed paces the thing like a ride down a ski slope, going faster and faster ... I actually liked this better than the ballyhooed The Lady Vanishes, to which it's often compared. And the veddy English team of Radford and Wayne veddy nearly steal the whole thing outright.

A bit methodical in its presentation but still a classic rendering of intrigue and high drama. Rex Harrison and Paul Henreid are superb!

Night Train to Munich has its moments but its generally pretty dull. Margaret Lockwood helped keep me interested but outside of the nifty miniature-based finale, the comic relief and the irony of seeing Victor Laszlo play a Nazi, I wasn't exactly enthralled. Night Train to Munich isn't exactly awful but I can't for the life of my figure out why there's a Criterion edition of this.

A lot of fun, but not quite as good as Lady Vanishes. Chalders and Caldicott are AWESOME!