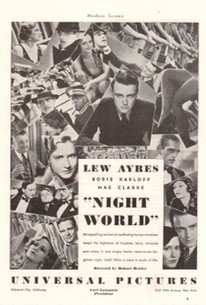 Night World is an astonishingly compact 57-minute extravaganza, all of which takes place at the upscale (but somewhat less-than-swank) nightclub owned by good-natured racketeer Happy MacDonald (Boris Karloff) (complete with a winning, grinning smile). In a story arc of no more than a couple of hours, MacDonald is betrayed by his faithless wife (Doris Revier), who has been cavorting with the club's stage producer (Russell Hopton), and who sets her husband up to be killed by a rival; the gentle, articulate African-American doorman (Clarence Muse) learns the fate of his beloved wife, whose stay in the hospital has been a source of worry for him all night; despondent socialite Michael Rand (Lew Ayres), the son of an acquitted murderess, meets chorus girl Ruth Taylor (Mae Clarke), who turns out to have a heart-of-gold; and gets to confront his mother (Hedda Hopper), a viciously self-centered and venal woman. But Michael and Ruth soon find themselves caught in the midst of the mob's attempt on Happy's life, and facing a pair of assassins who would just as soon kill them as look at them. All of these story threads are interspersed between a good deal of backstage banter -- including a tense pair of vignette with tough-guy Ed Powell (George Raft, about as scary as he ever looked on screen) -- and a Busby Berkeley-choreographed dance number that, despite the low-budget and obviously fast shooting schedule of this picture, manages to work in the latter's celebrated overhead camera angles and other requisite visual touches.

Alice Adair
as Chorine
View All

There are no critic reviews yet for Night World. Keep checking Rotten Tomatoes for updates!

There are no featured reviews for Night World at this time.