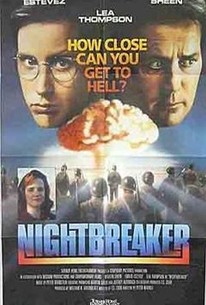 Father-and-son actors Martin Sheen and Emilio Estevez star in the made-for-TV movie Nightbreaker. The film was first telecast March 9, 1989, two months after the debut of another TNT Cable Service "original", Finish Line. The earlier film also starred a father and son, James and Josh Brolin; but, whereas the Brolins were cast in parent-child roles, Sheen and Estevez portray the same character. Nightbreaker is based on the recent revelation that the US government, in the interests of scientific research, deliberately exposed servicemen to radiation during the Nevada atomic bomb tests of the 1950s. Sheen plays a former military doctor, inexplicably suffering from sterility in the 1980s. Searching for answers, Sheen flashes back thirty years, to the time that he was a witness to the A-bomb tests. Estevez plays the younger Sheen in the 1950s sequences. Nightbreaker was written with what Jonathan Swift used to call "savage indignation" by T. S. Cook.

Lance Slaughter
as Bass
View All

There are no critic reviews yet for Nightbreaker. Keep checking Rotten Tomatoes for updates!

There are no featured reviews for Nightbreaker at this time.