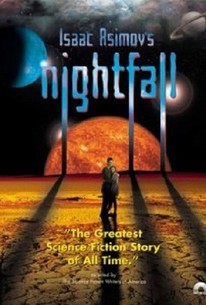 Isaac Asimov's classic science fiction story "Nightfall" posited a world bathed in perpetual sunlight because of its six suns, which are all in constant orbit so one is always shining. But once every 2,000 years or so there is an eclipse that throws the plant into darkness and drives people mad. Asimov is after a comparison of religious superstition and scientific knowledge here, centered on the poetic sense of awe evoked when darkness falls and the stars are visible for the first time. The present filmed version loses all the poetry, exacting science, and subtlety of its inspiration and adds instead the wooden, uncommitted acting of David Carradine (Kung Fu) as a scientist, hordes of Indian extras (it seems to have been filmed in Bombay), and some botched pyrotechnic battle sequences. Clearly the filmmakers lost their way from story to screen, opting instead for a Raiders of the Lost Ark feeling, with lots of lame action and adventure usurping the story's core concept. The Asimov story has garnered top honors in poll after poll, including one done by the Science Fiction Writers of America, and the packaging tries to capitalize on that cachet. Understandable, since this movie has nothing else going for it. --Jim Gay

There are no featured audience reviews yet. Click the link below to see what others say about Nightfall!