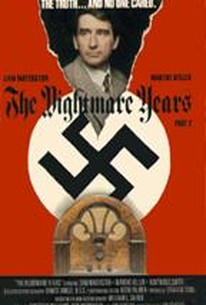 The Nightmare Years was a surprisingly underadvertised three-part miniseries, originally telecast over the TNT cable network. The production was based on a book by William L. Shirer, who in the mid-1930s was an American news correspondent in Berlin. In Part 1 (telecast September 17, 1989), Shirer (Sam Waterston) and his wife Tess (Marthe Keller) arrive in Germany just as the Third Reich is beginning to take hold. Attempting to relay information of Hitler's oppressiveness to the outside world, Shirer finds himself the constant target of censorship. This 2-hour episode ends with the German government's first sanctions against the Jews. Part two of the TNT cable network miniseries The Nightmare Years was originally telecast on September 18, 1989. Sam Waterston stars as American news correspondent William L. Shirer, an eyewitness to the steadily mounting horror of Germany's Third Reich. Marthe Keller costars as Shirer's wife Tess. In this episode, Shirer and his wife put their own lives on the line to help their Jewish friends escape the persecution of the Nazi higher-ups. Subsequent episodes of The Nightmare Years (based on Shirer's own memoirs) would detail Tess Shirer's illness after the birth of her child, and Germany's ultimate invasion of the Rhineland.

Critic Reviews for The Nightmare Years

There are no critic reviews yet for The Nightmare Years. Keep checking Rotten Tomatoes for updates!

Audience Reviews for The Nightmare Years

There are no featured audience reviews yet. Click the link below to see what others say about The Nightmare Years!