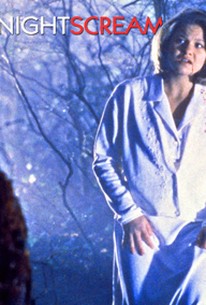 In this made-for-TV movie, a young woman (Candace Cameron Bure) moves to a small town that was rocked by a shocking murder a year before, in which a teenage girl was killed. The woman is told that she bears a striking resemblance to the victim, and as coincidence would have it, she begins having strange and troubling dreams about a violent attack that closely parallels the previous crime. As the girl begins sharing the details of her dreams with the police, the killers plot to kill her, fearful that she will be able to expose them as the killers. Nightscream also features Terri Garr, Ned Vaughn, and Casper Van Dien.

Bill Dow
as Will Benson

Ken McCusker
as Teddy
View All

A wholly forgettable little TV flick - one that may serve its purpose should it pop up on cable one night - but certainly nothing worthy of actual money.

There are no featured audience reviews yet. Click the link below to see what others say about Nightscream!