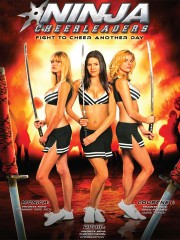 Eric W
December 16, 2018
This movie really isn't that good, but it's got some weird stuff and it's a little endearing. And is really so wrong to like it?

Rawballs B
July 21, 2014
What a creep and what a crap motion pic... But the three girls made the movie truly really funny and sexy...

Viktor N
May 10, 2014
Oh well.. it produces some smiles but really not so much more.. really bad fighting coreography.

Bengel W
October 25, 2013
Nice photography makes this movie a touch better than one ranked TV. Music is rather simple and not really thought out spoiling the overall effect. Actors and script match and is suitable for an afternoon family audience as the story and violence is fairly soft. Overall it is the actors that make this film watchable. Nibbles: Cheese toasty.

Ryan T
½ January 13, 2013
This movie probably deserves a half star but making fun of it was enjoyable enough for me to add one more.

My friends and I chose to watch Ninja Cheerleaders because we expected to see a hilariously bad B-movie. Unfortunately, instead, we saw a poorly written, passably acted, unfunny, strange action/comedy with gratuitous nudity, dull characters and... Well, I'm just going to make my accusation: The writer/director has a CBT fetish. There are several scenes where the three protagonists threaten to mutilate male genitalia, and the favorite move of one of the protagonists is a "throat/groin combination". The writer/director actually addresses this issue through dialogue, but doesn't actually stop any of it. I respect the interests and fetishes of other people, but Presley, you're not making an adult film here. Sure, you show a naked woman pole dancing in numerous scene transitions, there are two entire go-go dancing sequences, and there are two topless women in one particular scene, but you also attempt to give the characters some interesting traits and you actually progress the plot at a passable pace. Speaking of the characters, Presley tries to give them way too many traits without developing them at all. They're supposed to be geniuses, they're supposed to be go-go dancers that just want money for college, they're supposed to be cheerleaders, they're supposed to be ninjas, they're supposed to be best friends since first grade, one of them is supposed to have an abusive stepfather, another is supposed to have a mother that is actually accepting of the fact that her daughter is a go-go dancer, and... You get the point. Presley gives them traits, but they are never developed. They never really seem intelligent, and they lack chemistry with one another. The fight choreography didn't impress me; the fight sequences weren't entertaining. The plot was dull, and the setup for a sequel was laughable. Oh, and what was up with the electricity and sparks on the swords during Hiroshi's fight with Kinji?

A final thought: Kinji kept referring to herself in the third person. Please, never do this. Trust me, it isn't funny or amusing unless you're doing it briefly to mock someone that does it in an attempt to be humorous.

John W
October 5, 2012
I love bad movies. I love bad T&A movies. This is NOT in either category. It is simply a complete and utter waste of film, time, effort, insert-your-own-category-here with no . If there even was a genre for hot, genius, college attending, cheerleader/stripper/ninjas, this STILL wouldn't make the cut.

And some particular elements of the script are surprisingly decent -- the flashback interludes to police interrogation are pretty lazy dialogue-wise, but pretty cool story-wise. The rest are clearly awful: the weird cheerleading-coach molestation; the awkward Napoleon "These girls are actually smart!" hogwash; or the ugly anti-misogyny sadism ("What's up with all the nut-crushing?" / Indeed!). On a side note, George Takei has a campy coolness that's pretty interesting; I like his irrepressibly maniacal laugh.

Carys E
January 2, 2012
Ridiculous. Logic non-existent, random shots of naked pole dancers in between scenes... what WAS this?! And more importantly, what was George Takei doing in it??!!??

Paul D
½ November 25, 2011
Poor George Takei! This was terrible. Should have called it Ninja Strippers instead. Terrible writing, terrible fighting, and this director couldn't lead ants to a picnic! Not the best movie I've ever decided to watch.

Phil P
½ June 24, 2011
There was really no need for the random flashes of boobs for the transitions. George Takei killed it in this role.

Katrina H
February 13, 2011
Seemed like a good idea but it wasnt. *Sad face* And the random boobs flashing across the screen didnt seem to make any sence to me.

Anya S
November 30, 2010
Wow, the title made this movie sound like it would be pretty decent to watch, but when it started right away I could tell I was going to be in for an hour and a half of horrible acting uninteresting story plot, and really bad fight choreography. There was nothing special about this, the characters were very unrepresentable which made it hard to care about.
Also if you read the synopsis above it says that they are in high school, their not they are in community college trying to get into Brown University. Also a note to whoever made this movie, just because you have three used-to-be famous girls does not mean you have a hit. What I found interesting about this was how similar this movie was to Charlies Angels. In a way it was a combination of mainly Charlies Angels and a little bit of But I'm a Cheerleader. Don't waste your time.

Harlan V
September 15, 2010
Plain and simply: Ninja Cheerleaders is entirely horrible and a extremely painful waste of time. This "movie", and I say that with the utmost disgust, doesn't even warrant a cheap laugh.

Frank S
June 3, 2010
Really George Takei Ninja Cheerleaders really! You couldn't tell from the title this would be bad really... I hope those tv commercials pay you better than this drek..,
Page 1 of 4