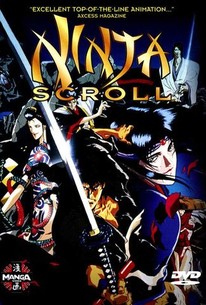 Removed from the typical futuristic element of most Japanese animated adventures, this 1994 feature takes place in more of a sword-and-sorcery epic set in feudal Japan. Jubei Kipagami, a ninja mercenary, wanders the countryside in search of work. On his travels, he encounters Kagero, a female ninja whose poisoned blood causes her pale skin to be lethal to the touch. Jubei rescues the woman from Tessai, a creature made of rock. They later find that Tessai is one of the Eight Devils of Kimon, who are involved in a plot to overthrow the Shogun. A story of impossible love between Jubei and Kagero is somewhat interesting, but the true draw of Ninja Scroll is its action sequences. The dazzling swordplay of Japanese live-action samurai movies is not often seen in the animated genre, which tends more towards science fiction; however, this animated work has fight scenes in abundance. Although its content is too strong for children, adult fans of Japanese animation, samurai films, and fantasy should find it enjoyable. ~ Jonathan E. Laxamana, Rovi

A wandering ronin takes on a posse of supernatural ninjas in a whipcracking race that never lets reality get in the way of a hearty bout of blood-lettting.

Its baroque sadism and sexism hasn't aged well, but it still packs a visceral kick.

There is so much going on here, that the film's total lack of subtext - or, more generously, its pure escapism - only sinks in afterwards. It may be a tale of sound and fury, signifying nothing - but all that demon-whupping sure is fun.

What it lacks in complexity, it makes up for in often dazzling animation ...

"Ninja Scroll" is a true anime/cult classic, which separates itself from the mass of similar titles due to its elaborate script, interesting though perverse characters, astonishing battles, and very graphic depiction of violence

A genuinely great piece of animation, one of the medium's greatest achievements in the 1990s in any country.

Ninja Scroll is a champion of anime and belongs in the upper echelons of its history.

For fans of Japanese animation at its most colorful, stylized, and ultraviolent, the film delivers the goods.

What dazzles most is the contrast between the beautifully rendered, pastoral backdrops of crags, waterfalls, forests, and temples, and the gruesome, stylized violence that takes place against them.

For those seeking the best ninja/samurai action on screen, there are dozens of live action movies either directed by Akira Kurosawa or based on manga by Kazuo Koike that are much better films than Ninja Scroll.

One of the most influential animes ever made ...

If there is a word that resumes quite well this film is action, NS is all about the action. The plot is "101 Action/epic fiction" and curious enough is what makes it work. Kawajiri knows that there is no point in trying to re-invent the genre, so instead he works in crafting a rich and excentric visual background.

A ninja-for-hire joins forces with a cursed female ninja and a gnome-like spy to fight against the Eight Devils of the Dark Shogun. Above-average anime adventure/fantasy set in feudal Japan featuring nice artwork, a complicated but coherent plot, and graphic violence and nudity. This is a 5 star movie if you're a 16 year old boy, but loses a half star with every two years you age until it flattens out (if you're a girl, I assume it starts out flat).

12/09/2010 (ONLINE) If you liked "Ninja Assassin" then you may wanna see this, especially in the "blood and gore" department. This is another "classic" Manga/Anime that blew up the scene back in the days like "Fist of the North Star", "Guyver" and stuff like that and it's still a cool as flick to watch for me. The story is cool and I'm always down with the whole "Ninja" thing. Awesome drawings, kick-butt voicing and blood is constantly splattered generously. Although it's quite old it's still better than some the "animated flicks" made these days, even better than some "live action" ones too, but then again that's my opinion. It's been a while since I'd seen this and watching this again was still a great experience, I am glad I found it online because someone burrowed my DVD of this and I haven't seen it since. I might buy another one. Maybe.

Violent, sexist and stupid, Ninja Scroll is the sort of movie that gave anime its sordid reputation. The decent action scenes and retrospectively impressive (but now dated) animation keep it from being totally irredeemable, but Ninja Scroll's plot is just about the worst thing you're liable to see in anything you watch, not necessarily for the content itself but for how seriously it takes everything. Plus, the repeated rape is inexcusable.