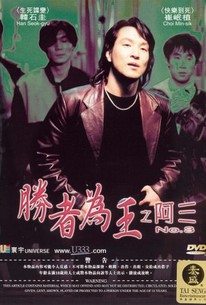 Writer Song Neung-Han made his directorial debut with this South Korean crime drama about sharp-witted young gangster Tae-Ju (Han Suk-Kyu) whose bar-hostess wife (Lee Mi-Yun) takes both poetry lessons and love sessions from a local poet. Meanwhile, Tae-Ju realizes he's only No. 3 in the pecking order of his urban gang, a situation that means competing with stupid tough Ashtray (named after his weapon of choice). Resentment re Japanese dominance, police corruption, and other serious themes surface as the industrial hip-hop music leads the storyline toward a conclusion set in the 21st Century. Shown at the 1998 Vancouver Film Festival.

Critic Reviews for No. 3

all the Tarantino-esque chaos of plot and subplot undercuts itself with such determined bathos that the viewer is more alienated than engaged, and Song's bag of stylistic tics has a similar effect

There are no featured reviews for No. 3 at this time.