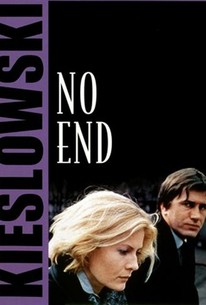 The late, celebrated Polish director Krzysztof Kieslowski) has created a downbeat but emotionally harrowing, magic realist tale in this film about a fictional couple whose lives are taken over by events in Poland in the turbulent, early 1980s. Antoni Zyro (Jerzy Radziwilowicz), a Polish attorney, dies in an automobile accident. For the next several weeks, his spirit watches what happens to his wife Ula (Grazyna Szapolowska) and his cause, and directs her course of action. Ula decides that her love for her dead husband can only be expressed by hiring an attorney to defend Antoni's clients - one of the most prominent is a hero of the Gdansk strikes, accused of creating the Polish solidarity movement and fighting for the cause of democratic labor. As the lawyer defends the worker who fights for his right to organize a union, Ula is still struggling with the loss of her husband -- and losing her battle to go on.

[Deserves] to be counted among his acknowledged classics

I suspect that the story of how No End came to be made, and of how it speaks to Polish audiences, would be of as much interest to American audiences as the film itself.

No End functions both as a compliment and a precursor to the director's most lasting works.

This 1984 feature by the remarkable Krzysztof Kieslowski has been described as his most explicitly political.

The aching of a moral crisis permeates every pore, from courtroom to bedroom

Kieslowski's most overtly political film, also one of his most potent; it boasts a finale that will surely set viewer's tongues wagging, whether in agreement or disconcertion

A dated although nonetheless remarkable work of propaganda.

A brilliant opening scene, but the political message is weak.

The film was powerful enough in its political jibes to have made the state and the church and the opposition party condemn it.

There are no featured audience reviews yet. Click the link below to see what others say about No End (Bez konca)!