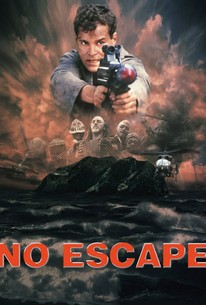 A man from the future fights to survive in a society thrown back to the dark ages in this sci-fi adventure set in 2022. Capt. Robbins (Ray Liotta) is a military man who, after he's convicted of the murder of his superior officer, is sentenced to a high-tech prison ruled by the Warden (Michael Lerner), a cruel taskmaster who enjoys torturing his inmates. After a scuffle with the Warden, Robbins is transferred to a primitive island penal colony known as Absalom, where the civilization is dominated by two groups, the Insiders, a peaceful tribe led by the Father (Lance Henriksen), and the Outsiders, a pack of violent misfits led by Marek (Stuart Wilson). Robbins runs afoul of the Outsiders and is injured in a skirmish; he escapes to the Insiders' camp, where he plots his revenge. No Escape was based on the novel The Penal Colony by Richard Herley.

Ric Herbert
as Insider
View All

News & Interviews for No Escape

View All No Escape News

Critic Reviews for No Escape

No Escape obviously absorbed the filmmakers at the technical level, and it is fun to look at its sets and costumes. Little thought has been given to the personalities of the characters.

There are inklings of ideas, but the film's bad instincts get the better of its good intentions.

A synthetic pastiche of sci-fi, action movies (borrowing feely from the superior Mad Max movies), and routine prison drama that's a sensless, incoherent mishmash that even a reliable pro like Liota cannot salavage.

A throwback to the energetic sci-fi films of yesteryear. Frantic and Fun.

Martin Campbell's generally an underrated action director, but this is just okay, not one of his finer efforts

Audience Reviews for No Escape

Terrible film but there is some great acting in it.

Fun, action packed 90's movie that was overlooked and under appreciated. The story is about a highly decorated Army cadet who assassinates his general officer for moralistic reasons. His punishment is life in prison on a deserted island called "Absolom" where the deadliest of prisoners are forced to live in a brutal society controlled by vicious warlords. The graphics, for the time, were good. Ray Liotta puts in a great performance, which is something I don't usually find myself saying too often. This movie pales in comparison to current eye candy blockbuster action movies, but this is still a great 90's action movie that you should check out.

The "futuristic apocalyptic prison" thing has been done to death. This one is more of the same, but not that badly done actually. Ray Liotta can be fun to watch from time to time.