No Fathers in Kashmir2019 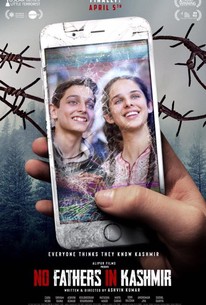 No Fathers in Kashmir Photos

A teenage British Kashmiri, Noor, retraces her roots. She is joined by Majid, a local Kashmiri boy who is more smitten by her exotic foreignness than her obsession to unravel the mysteries of their disappeared fathers. Much against his better judgement, Majid finds himself guiding Noor to a forbidden area in the Indo-Pak border fraught with danger : wild bears, ghosts of the past and army patrols. They stumble upon a dark secret that they shouldn't have seen and Majid's worst fears are realised : they are set upon by an army patrol. Being British, Noor is released but Majid is detained for questioning. Having put him into peril, how far is Noor willing to go to have Majid released? And, can love ever be the same again for these two? This is a story of forgiveness and hope, seen through the playful eyes of innocent teenagers. From the world's deadliest conflict, based on hundreds of true stories, this tender storm of first-love and heart-break echoes Kashmir's own story in surprising and revealing ways.

Critic Reviews for No Fathers in Kashmir

[A] well-meaning but clunky drama.

It's a film of awful line-readings, badly edited conversations (too many gaps) and, a first for me, a character who even struggles to convince while saying these two words: "Absolutely not."

This is a urgent issue that needs raising, but I have to confess to being restive during this movie: the performances and line-readings were often underpowered.

Sometimes stunning, sometimes stressful and all together sobering view of a situation that [writer-director Ashvin Kumar] seasons with hope.

Ashvin Kumar is gutsy enough to discuss the issues that plague Kashmir under a government that has revved up the nationalist discourse to a fever pitch.

The impact of the quality writing, the steady cinematography and the sharp editing is enhanced significantly by a cast of actors who strike the right notes all the way.

This is a skilful depiction of the entangled complexity of this region, explored through the eyes of characters who are easy to identify with.

Although the film's message isn't subtle, the ardour behind it is forceful, and the striking landscapes are a bonus.

This film is worth a viewing and is an interesting take on other films that explore tragedy & war torn areas, we see Kashmir through the eyes of hope, forgiveness, and innocence rather than barbarianism, destroyed lives, and murder. - Allie Loukas, BRWC

Ashvin Kumar chooses to mostly put his film as an English language hard-hitter, fails to subdue the lack of subtlety with something that remains in one's memories.

There are no featured reviews for No Fathers in Kashmir at this time.

No Fathers in Kashmir Quotes