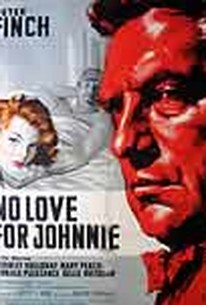 No Love for Johnnie Photos

Peter Finch plays Johnnie Byrne, a British member of parliament. When Johnnie loses out on an important cabinet post, he's hardly surprised; he's been a loser so long that it's par for the course. Treated shabbily by his communistic wife Rosalie Crutchley, Johnnie begins an affair with fashion-model Mary Peach. His ardor causes him to miss an important House of Commons meeting, which subsequently leads to his disgrace in the eyes of his leftist political associates. A chance at a reconciliation with his wife is scuttled when Johnnie finds that he will lose a much-coveted cabinet seat if he does not sever his communist ties, both professional and personal. No Love for Johnnie was based on a novel by Wilfred Fienburgh, himself a Socialist MP who evidently knew whereof he spoke. ~ Hal Erickson, Rovi

Critic Reviews for No Love for Johnnie

There are no featured reviews for No Love for Johnnie at this time.

No Love for Johnnie Quotes