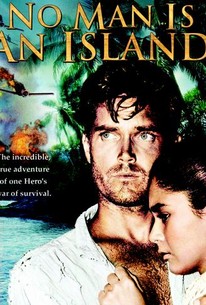 This is a routine docudrama on the life of George R. Tweed, a World War II hero played by Jeffrey Hunter. Tweed was trapped on Guam from the day when the Japanese bombed Pearl Harbor and began their Pacific campaign. Tweed manages to survive detection throughout the long war years, and when the time comes for the Allies to invade the island, he is instrumental in signaling information to them from his hidden base on a hilltop. Although the events depicted are based on facts, those facts and the character of Tweed himself are sacrificed at times to the demand for dramatic effects.

Critic Reviews for No Man Is an Island

There are no critic reviews yet for No Man Is an Island. Keep checking Rotten Tomatoes for updates!

There are no featured reviews for No Man Is an Island at this time.

No Man Is an Island Quotes