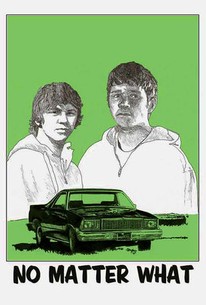 No Matter What Photos

In this independent drama, Nick (Waylan Gross) and Joey (Matt Webb) are two friends in their early teens growing up in a small town in Northern Florida that's been hit hard by economic downturn and bad drugs. Nick has been practically raising himself for years, while Joey is growing up under the watchful eye of his mom... or at least he was, until she began to drift away from their household and one day simply disappeared without notice. With little mooring in their lives, Nick and Joey set out to find her, and the two are forced to grow up in a hurry as they hit the road, leaving Florida behind on a road trip that's one part youthful adventure and one part desperate effort to hold on to what little stability exists their lives. No Matter What was the first directorial assignment for Cherie Saulter, who also wrote the film's screenplay; the film received its world premiere at the 2011 South by Southwest Film Festival. ~ Mark Deming, Rovi

Critic Reviews for No Matter What

There are no critic reviews yet for No Matter What. Keep checking Rotten Tomatoes for updates!

There are no featured reviews for No Matter What at this time.

No Matter What Quotes