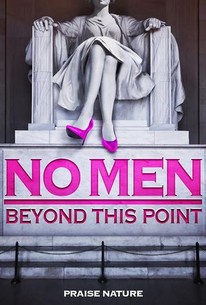 Imagine a world where, since 1953, women have been able to reproduce without men and they are no longer giving birth to male babies. Now, over 60 years later, this deadpan mocumentary follows the youngest man still alive - 37 year-old Andrew Myers. Working as a housekeeper for a family of women, Andrew finds himself at the center of a battle to prevent men from going extinct. No Men Beyond This Point is a feature film that asks the question,what would the world be like if women were in charge?

Critic Reviews for No Men Beyond This Point

The joke is belaboured and the larger point a bit unclear.

The scenario is airtight - faked archival footage is brilliant - but the story might have worked better as a thriller like Logan's Run or Children of Men.

Anyone who tries to tackle gender is bound to get into a sticky situation of some sort, and for the most part No Men Beyond This Point is enjoyable despite its issues.

Sawers has fun teasing out the implications of such a scenario.

The gags, many of which come packaged with the premise, largely fall flat. For all the thought put into No Men, it still feels more like the makings of some solid sketch comedy than a feature film.

With such a compelling premise, the film definitely keeps your interest and is at times very smart, but it just misses.

Combined with some stiff performances (even for fake talking heads), it's hard not to feel like No Men Beyond This Point is just one long "men are from Mars, women be shopping" joke.

Led by Kristine Cofsky, the large cast is good at being deadpan. Then again, there's not much life to this movie.

Audience Reviews for No Men Beyond This Point

There are no featured audience reviews yet. Click the link below to see what others say about No Men Beyond This Point!

No Men Beyond This Point Quotes