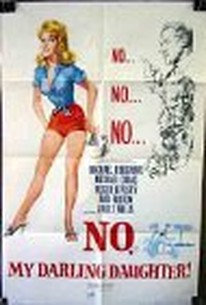 No My Darling Daughter Photos

In this comedy, the daughter of a British aristocrat is sent to Parisian finishing school where she falls in love with a charming American student, and discovers that his father is a business associate of her own. Paternal trouble ensues when her young man forgets to deliver an important letter to her father and he is forced to fly to New York to do the business himself. While gone, he sends his daughter to Scotland with his friend. Her boy friend follows and slyly begins suggesting that they elope. When her father learns the lad's identity, he offers his blessing. Unfortunately, the young daughter has fallen deeply in love with his best friend's handsome son and they elope. Both fathers are very pleased. ~ Sandra Brennan, Rovi

Terry Scott
as Constable
View All

Critic Reviews for No My Darling Daughter

There are no critic reviews yet for No My Darling Daughter. Keep checking Rotten Tomatoes for updates!

There are no featured reviews for No My Darling Daughter at this time.

No My Darling Daughter Quotes