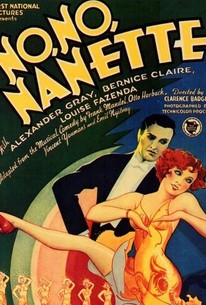 No, No, Nanette Photos

No, No, Nanette was the second film version of the popular Otto Harbach-Vincent Youmans Broadway musical. Though slightly updated, the basic plot remains the same, with heroine Nanette (Anna Neagle) entering into a financial arrangement whereby she must answer "No" to every question during a 24-hour period. It's all for the sake of her rogueish uncle (Roland Young), who's heavily in debt thanks to a gaggle of gold-digging chorines. Nanette's task is complicated by her romantic entanglements involving an artist (Richard Carlson) and a flashy theatrical producer (Victor Mature). The songs include "I Want to Be Happy", "Tea for Two" and the title number. Unlike the previous Neagle-RKO Radio-Herbert Wilcox collaboration Irene, No, No, Nanette fizzled at the box office. For many years, the film was withdrawn from circulation because of Warner Bros.' 1950 remake, the Doris Day vehicle Tea for Two.

Minerva Urecal
as Woman in Airport

Dora Clement
as Woman at Smith Home
View All

Critic Reviews for No, No, Nanette

There are no featured reviews for No, No, Nanette at this time.

No, No, Nanette Quotes