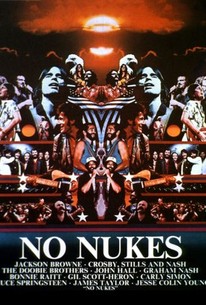 Also known as The Muse Concert: No Nukes, this rock-concert film offers a good representative cross-section of old-line show business liberalism. Bruce Springsteen and Bonnie Raitt are the "newest" members of the aggregation by default. They're okay if not brilliant, which can also be said for their fellow troubadours Jackson Browne, Crosby, Stills, and Nash, James Taylor and the Doobie Brothers. The anti-nuke theme of the concert isn't as overbearing as it might have been under the circumstances (even "special guest" Jane Fonda is comparatively benign). The best sequences in the film are comprised of misleading government-propaganda clips from the old TV series "The Big Picture" (love those uniformed piglets!) The graininess of the film stock is the only real detriment of No Nukes.

Critic Reviews for No Nukes

The photography by Haskell Wexler is bristling with energy and style, and the stereo sound is about as vivid as you can get without actually being at the concert itself.

Audience Reviews for No Nukes

There are no featured audience reviews yet. Click the link below to see what others say about No Nukes!