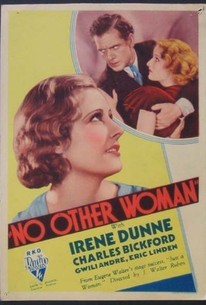 No Other Woman Photos

The melodramatic No Other Woman is a remake of the 1925 silent film Just a Woman which was based on the play of the same name by Eugene Walter. Early in her career, Irene Dunn stars as ambitious housewife Anna Stanley, who pressures her steelworker husband, Jim (Charles Bickford), into a business partnership with Joe Zarcovia (Eric Linden). A fellow boarder at their rooming house, Joe's business idea involves a new type of dye. Jim quickly becomes a millionaire and finds the transition difficult from blue-collar worker to wealthy socialite. He soon takes up with a mistress, Margo Van Dearing (Gwili Andre), whom he meets at a party. Forced to get a divorce, the couple duke it out in the climactic courtroom scene with sleazy lawyer Bonelli (J. Carroll Naish). ~ Andrea LeVasseur, Rovi

Edwin Stanley
as Judge
View All

Critic Reviews for No Other Woman

There are no critic reviews yet for No Other Woman. Keep checking Rotten Tomatoes for updates!

There are no featured reviews for No Other Woman at this time.

No Other Woman Quotes