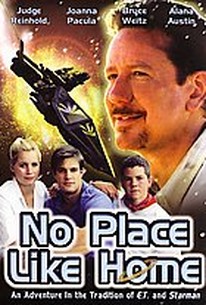 After discovering an alien that just crash landed on Earth, two teenage siblings due the best to keep their extraterrestrial secret under wraps as they help the desperate star man find his way back home. Mel and his brother Mac were simply going about their business when the sky was suddenly set ablaze by a blinding celestial explosion. Later, when the curious teens discover that the flash in the sky was actually a UFO crashing through the atmosphere, they meet a mysterious figure (Geoff Stults) from beyond the stars. Now, as the kids seek the advice of nearby Navajo descendent Evie (Adrienne Barbeau) while attempting to keep the otherworldly visitor a secret from their inquisitive father (Judge Reinhold), a local law enforcer (Richard Moll) and a tenacious government agent (Joanna Pacula) do their best to ferret out the truth and be the first to get undeniable proof of life on other planets.

Clayton Taylor
as Mac
View All

There are no featured reviews for No Place like Home at this time.